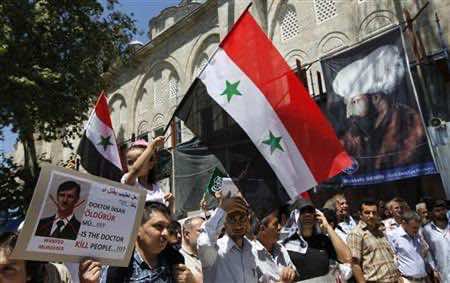 The first U.N. mission to be allowed into Syria since the government’s brutal crackdown began in March found that civilians urgently need more protection and feel “under constant threat,” the United Nations said on Friday.

After months of refusals, Damascus agreed last week to let the U.N. team into the country and promised that it would have full and unfettered access to all sites, a pledge that U.N. spokesman Farhan Haq suggested was only partly kept.

“A U.N. team has completed a humanitarian mission to Syria, which took place on Aug. 20 to Aug. 25,” Haq told reporters.

“The mission concluded that although there’s no countrywide humanitarian crisis, there is an urgent need to protect civilians from the excessive use of force,” he said.

Assad has sent in tanks and security forces to crush months of demonstrations by activists calling for an end to his family’s 41-year rule, witnesses have reported. The United Nations says more than 2,200 civilians have been killed since the clampdown began in March.

Haq said the mission was not able to make an entirely independent assessment of the situation in Syria.

“The constant presence of government officials limited the mission’s ability to fully and independently assess the situation,” he said.

“However, the people it was able to talk to in areas of previous or ongoing unrest said they felt extremely intimidated and under constant threat,” he said.

He also reiterated calls for security forces to “refrain from the excessive use of force against civilians.”

Separately, U.N. Security Council diplomats said that Russia and China were resisting a U.S. and European push to impose sanctions on Assad, members of his family and close associates because of the crackdown.

Assad told U.N. Secretary-General Ban Ki-moon earlier this month that military and police operations had ended. Ban later said it was troubling that Assad had not kept his promise.