By Edith Honan and Basil Katz 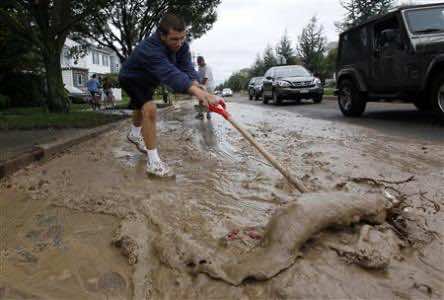 By Edith Honan and Basil Katz

Hurricane Irene surged through New York City on Sunday flooding waterfronts and low-lying areas, but America’s most populous city avoided the mass devastation some had feared.

Irene was downgraded to a tropical storm on Sunday morning and was headed next to pass over parts of Massachusetts and Rhode Island.

On its march up the East Coast over the weekend, the storm left at least 12 dead, as many as 3.6 million customers without electricity, widespread flooding and damage to coastal towns in several states. It forced the closure of New York’s mass transit system, and the cancellation of thousands of flights.

New York Mayor Michael Bloomberg said there were no reports of deaths or injuries in the city, though there were some close calls — in Staten Island, 50 firefighters in boats had rescued 61 adults and 3 babies trapped in five feet of water.

While weakened, the swirling storm still packed a wallop, especially in districts such as the Rockaways peninsula, a low-lying strip of land exposed to the Atlantic Ocean on the southern flank of the city. Authorities closed three bridges leading to the peninsula before the storm.

“It was like being in the hull of a ship,” said Patricia Keane, 42, who stayed in her home and lost power. She ran backup generators and supplied electricity to pumps for four neighbors with flooded basements.

The city of 8.5 million people is rarely hit by hurricanes and is plagued by aging infrastructure, leading many to issue dire warnings in recent days of what the hurricane could bring. Authorities had taken unprecedented steps to prepare, including mandatory evacuations and a total shutdown of mass transit systems that will have had a major economic impact.

The head of the Metropolitan Transportation Authority, said it was too soon to say when the New York subway system would return to service as there needed to be a line by line assessment of problems. The worst damage was to commuter rail lines running north to Connecticut and towns in New York state, with three lines suffering serious flooding.

“All in all we are in pretty good shape,” Bloomberg said, adding that, while it would be a “tough commute” on Monday, there had been no long-term damage to the subway system.

New Jersey, home to millions of commuters who travel into New York each day, was hard hit by flooding, downed trees and power outages. New Jersey Governor Chris Christie told NBC’s “Meet the Press” he expects damages from Irene to be costly, possibly worth billions of dollars, along the Atlantic coast and from inland river flooding.

Bob McDonnell, the governor of Virginia which was hit earlier by the Hurricane, told CNN “We prepared for the worst but came out a little better than expected. Unfortunately now, four fatalities have been confirmed,”

“We’ve got some significant damage in some areas, from flooding, from wind, a lot of trees down, 2.5 million people or more without power in Virginia, that’s the second largest outage in history,” he said.

In North Carolina, where authorities confirmed at least six storm-related deaths since the storm made landfall on Saturday, Governor Bev Perdue was expected to request a federal disaster declaration.

Irene was still packing tropical storm-force winds of 60 miles per hour as it moved over southern New England.

In Manhattan, where some had predicted massive flooding in the financial district, there was about a foot of water in the streets at the South Street Seaport in Lower Manhattan before the tide began receding mid-morning.

Jeremy Corley, a 32-year-old web manager, was out in shorts and a rain jacket at the Seaport on Sunday morning. “I was watching the news on TV and they were way over-exaggerating how bad it is so I wanted to go outside and check it out,” he said.

Nearby, a man was walking his two dogs through water that came up to their bellies. A mile or so further north on West Broadway, a man tried to kayak in the street, but a cyclist was also able to navigate the same street as the water was not too deep.

Wall Street’s financial district seemed largely unaffected as did Ground Zero, where the 10th anniversary of the September 11 attacks is soon to be observed. The New York Mercantile Exchange building planned to open as usual on Monday, while the New York Stock Exchange andNasdaq Stock Market also said they expected a normal trading day.

Air travel in and out of New York area airports remained suspended on Sunday and was expected to resume late Monday afternoon “at best,” said Chris Ward, executive director of the Port Authority.

Oil refineries and nuclear power plants along the U.S. East Coast considered restarting as Hurricane Irene left many with only minimal damage. The hurricane was downgraded to a tropical storm with 60-miles-per-hour winds as it made landfall in New York on Sunday.

On Long Island, which juts north and east from New York City, sand berms built to hold off the flooding and protect coastal businesses appeared to have failed, and the waves at Long Beach, which faces the ocean, crested up over the boardwalk and onto the streets, taking with them a two-story life-guard station.

Jim Nolan, a 55-year-old architect, was out making his own assessment of the area around his home on the shore of a lagoon at Copiague, on the south shore of Long Island. But downed trees and flooding stopped him from driving very far.

“It was about as bad as I expected,” he added of the storm. “The more scientific weather channels had a tropical storm, the high end news companies had doom and gloom reports of 80 to 90 miles an hour — I just didn’t believe it.”

He had a busy night taking care of his 34-foot cabin cruiser tied to a dock by a number of lines that broke during the night. “About 3 O’clock two snapped, two snapped about 4 or 5 o’clock and one snapped half an hour ago,” Nolan said. “It was nice and warm so I put my bathing suit on and went out there to work on it with my son,” Nolan said.

There was a general sense in New York that the storm, reported on breathlessly for days by television reporters, was not as bad as it could have been.

“The water looks really groovy, it’s like in that movie ‘The Perfect Storm,’ — it’s swelling every way and the wind is blowing it every way, it’s heaving,” said Jill Rubenstein, speaking from her third-floor apartment in an evacuation zone at the Harlem Yacht Club on City Island in the Bronx.

The storm dumped up to eight inches of rain on the Washington region, but the capital avoided major damage. Some bridges were closed but airports remained open and transit operated on a normal schedule.

After Irene, weather watchers were keeping an eye on Tropical Storm Jose, which formed near Bermuda.

This year has been one of the most extreme for weather in U.S. history, with $35 billion in losses so far from floods, tornadoes and heat waves.