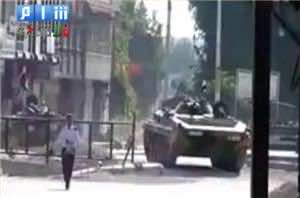 Syrian security forces have shot dead two people and wounded nine others in the northwestern province of Idlib, activists from the Syrian Observatory for Human Rights said.

“Two people were killed and another nine wounded in the Khan Sheikhun area near Idlib (city) during an incursion by security forces and the army,” Observatory head Rami Abdel Rahman told the AFP news agency on Sunday.

Syrian activists told Al Jazeera that two Syrians died of their critical wounds on Sunday in Homs and Daraa provinces, and a third was found dead in Harasta, near Damascus, after snipers opened fire on him.

The targeted villages were in the eastern Deir ez-Zour province. Arrests also were reported in Idlib province. Intermittent gunfire erupted in several areas across the country.

The Syrian Observatory for Human Rights and the Local Co-ordination Committees reported that one man had been shot overnight in the Damascus suburb of Saqba.

Meanwhile, sources in Syria told Al Jazeera that a 12-year-old boy was killed and four people wounded, including a woman, when pro-government loyalists fired indiscriminately in al Bukamal is in Deir Ezzour near Iraq, and then proceeded to loot shops.

On Saturday, activists said one demonstrator was killed and 10 hurt when security forces attacked the Rifai mosque in the capital’s western suburb of Kafarsouseh.

Later in the day, protesters from Douma, on the outskirts of Damascus, marched towards the centre of the city to protest against the mosque attack. When the protesters arrived in the suburb of Saqba, security forces opened fire on them and one person was killed, according to activists.

The bloodshed prompted the Arab League to agree to go to Damascus bearing “an initiative to solve the crisis” in Syria, a statement said after a special meeting of Arab foreign ministers in Egypt.

The ministers “asked the secretary-general of the Arab League to carry out an urgent mission to Damascus and transmit the Arab initiative to resolve the crisis to the Syrian leadership,” the statement said on Sunday.

It did not give details of the initiative, but Al Jazeera has learned that some of the suggestions would include the holding of presidential elections, withdrawal of the army from the cities, the release of political prisoners and those rounded up in the protests, and the formation of a national unity government that includes members from the opposition.

The statement also called for an end to the bloodshed in Syria that opposition activists say has left more than 2,200 people dead and urged respect for the Syrian people’s right to see political, social and economic reforms.

The ministers expressed their “concern faced with the grave developments on the Syrian scene” and called in their statement for an “end to the spilling of blood and follow the way of reason before it is too late.”

However, Syria on Sunday reportedly rejected the statement, in a diplomatic protest memo presented to the Arab League, sources told Al Jazeera.

The memo said the release of the statement was in contrast to what was agreed to during the meeting. According to the Syrians, they agreed on a visit from the Arab League chief Nabil Al Araby, but said that no statement was going to be issued at the end.

Syria was apparently surprised by the statement, which according to their protest memo, is a violation to the principles of collective Arab action.

Russia also announced it was sending a senior envoy to Damascus on Monday, according to the Itar-Tass news agency.

“We are really very sad,” he told the Anatolian news agency. “Incidents are said to be ‘finished’ and then another 17 people are dead. How many will it be today? Clearly we have reached a point where anything would be too little too late. We have lost our confidence.”

In another exertion of power, Syrian authorities on Sunday banned three prominent opposition figures from leaving the country to take part in a televised debate in neighbouring Lebanon.

Michel Kilo, Loay Hussein and Fayez Sara were to take part in a televised panel discussion to be aired by the US-funded Al-Hurra television. Hussein said they were told by Syrian immigration authorities at the border that they were forbidden from leaving out of concern for their safety in Lebanon.