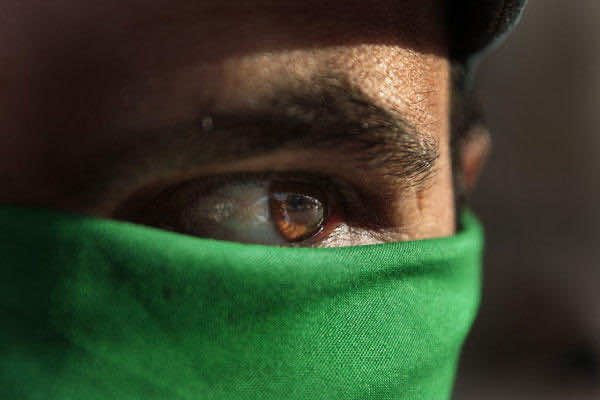 In a part of Tripoli known for its loyalty to Muammar Gaddafi, two men vented their fury over the fall of the Libyan leader, shouting abuse at the media and calling journalists liars, traitors and spies.

The tens of thousands of jubilant Libyans who cheered the rebels on their march to the capital have stolen the media limelight. But among others in the city, anger simmers over the rebels’ successful revolt against Gaddafi’s 42-year-rule.

“You media don’t tell the truth, you’re all traitors, spies,” shouted a taxi driver, his face contorted with anger, not caring that nearby were armed and zealous rebels.

“You sold our country out,” shouted another man who came to join him, before a deafening crack prompted the shoppers in the busy street to duck and flinch.

“Look at this,” shouted the taxi driver, pointing at the young rebel across the street who had fired an anti-aircraft gun into the air.

“This is what our country has come to,” he said.

Gunfire still echoes through the city’s streets, most of it exuberant shots in the air fired by rebels, but some of it apparently clashes between them and Gaddafi’s supporters.

In Tripoli’s Batata district, a shop worker ushered this reporter into a corner of the store, away from customers.

“Gaddafi gave us the best life. We were comfortable, we could go anywhere we wanted. Now we can’t go out at all. I have friends in Gaddafi’s army, and they will never surrender,” the 20-year-old said.

“Only God, Mohammed and Muammar,” he added, repeating a well-known pro-Gaddafi slogan that rebels have been busy defacing and covering with their own graffiti in recent days.

“Before, arrogant or not, under Gaddafi there was no killing in the streets, no weapons. Now after the revolution, there’s killing, fear. I wish he was still here,” he said.

“There’s more Gaddafi supporters than rebels here. But they can’t act right now as we don’t know what the future will be. They’re waiting for Gaddafi to come back,” he added.

Gaddafi’s whereabouts and that of his son and heir apparent Saif al-Islam are unknown, and the rebel leadership has announced a bounty of $1 million for Gaddafi’s capture.

Outside the store, commotion erupted as rebels bundled a dark-skinned man into a car. Many rebels accuse nationals of nearby African countries of being mercenaries for Gaddafi.

Identity cards from Chad, Niger, Maliand other African states have been found on the bodies of Gaddafi fighters.

On Saturday, reporters saw the putrefying bodies of 22 men of African origin on a Tripoli beach. Volunteers who had come to bury them said they were mercenaries whom rebels had shot dead.

The uprising against Gaddafi’s authoritarian rule began in Libya’s neglected east, where the Libyan leader attempted to crush the revolt using tanks and fighter jets.

Gaddafi took more care of his home town Sirte and the capital, where many benefited from his largesse. Sirte is not yet under rebel control, and pockets of Gaddafi loyalists are still battling the rebels in other parts of Libya.

Armed young rebels, mostly from poorer parts of Libya, now control Tripoli. Many of those carrying rifles and pistols are little more than teenagers.

In Tripoli’s Abu Salim district, a well known Gaddafi stronghold near his Bab al-Azizya military complex, two young men cruised the streets in a car. Keen to join the rebels, they were asking for weapons and offering to man a checkpoint to search for Gaddafi supporters.

Few loyalists voice their opinions openly, and in Tripolian atmosphere of suspicion and tension prevails. Many people blame attacks on the rebels on “a fifth column” of secret Gaddafi loyalists bent on undermining the rebel movement.

“You don’t know who these people are, they’re the ones to be afraid of,” said Mohammed Aun, 20, who had asked a man in the street where he could find weapons.

The man, civil servant Habib Ghabri, 40, told them they should apply for official permission before taking up arms — in effect fobbing the boys off.

“We want both the opposition and the rebels to give up their guns. Why should citizens carry guns now that Gaddafi has gone?” he said.

Ghabri said he planned to go from house to house and urge people to give up their arms, a plan drawn up with local officials. He held a sheaf of papers with a spreadsheet on them to record the weapons collected.

He had only collected two mortar rounds the previous day.

“They are so many Gaddafi supporters here, but when the rebels came in we didn’t point them out. They are our brothers, our neighbours,” he said.

“If he doesn’t have a gun and supports Gaddafi, so what? I’ve been living with them for years,” he added.

The rebel governing body has warned rebel fighters against revenge attacks, and in a series of text messages to Libyan mobile phones urged their countrymen to treat captured Gaddafi loyalists humanely.

They have also in the past offered an amnesty to those who lay down their arms.

Many of the best-known Gaddafi loyalists have fled, leaving their homes empty.

Some are now defaced and looted. On one home, graffiti read: “Property of the people, not the arrogant one.”

In another, boys wielding a metal pole smashed furniture, broke down doors and tore Gaddafi posters. Identity cards showed the owner of the house was a military officer.

One Abu Salim resident, voicing his antipathy towards the rebels, was not optimistic that Gaddafi loyalists would feel it was worth giving up the fight.

“There were no problems under Gaddafi. There was security. We haven’t seen anything from the rebels. They have no planning. Looks what’s happening. There’s no light, no water,” said Adel Farhati, 37, referring to water and power shortages.

“The rebels aren’t going to give the Gaddafi supporters anything. They are too well known, so they’ll just keep fighting.”