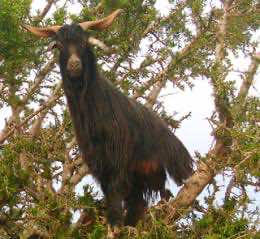 The booming demand for Morocco’s argan oil, now the most expensive edible oil in the world, is providing economic and social benefits for rural communities but appears to be threatening the health and future of the native argan forests in southwestern Morocco, reports a team of researchers led by a University of California, Davis, economist.

The researchers reported their findings online this week in the early edition of the Proceedings of the National Academy of Sciences.

“Our research indicates that while the argan oil boom seems to have benefited locals and improved educational opportunities, especially for girls, it has not improved the forests and may actually have led to their degradation,” said Travis Lybbert, an associate professor in the UC Davis Department of Agricultural and Resource Economics.

Argan oil, derived from the seeds of the deciduous argan tree fruit, has been an important resource for Morocco’s Berber people for centuries. The oil came to the attention of the outside world in the 1990s and is now highly sought for culinary, cosmetic and medicinal purposes, pushing the price today to roughly $300 per liter. (One liter equals slightly more than one-fourth gallon.)

As demand for argan oil has grown since the beginning of the boom around 1999, many people have looked to the argan oil market as a “win-win” way to reduce rural poverty and lessen the environmental threat to the argan forests.

Lybbert and his colleagues have been investigating those claims during the past decade, concluding in part that among the households in the argan-growing region, those with access to argan fruit benefited economically and were more likely to send their girls to secondary school. The researchers saw similar benefits of the argan trade across villages and communes or collections of villages.

However, the researchers also found evidence of negative effects. For example, as households benefited economically, they often purchased more goats – the primary threat at this time to the argan forests, because the goats climb the trees to graze their leaves. Households also appear to be resorting to more aggressive fruit harvesting techniques, which can damage branches and dislodge buds for the next year’s production.

To complement this household-level analysis, the researchers used satellite imagery from 1981 to 2009 to see the impact of the argan oil boom, finding evidence that rapid appreciation of argan oil prices had not helped the argan forests and may even have sped their degradation.

The researchers argue that policies and programs that aim for “win-win” benefits to both local households and local biodiversity must be based on empirical evidence and informed by the complex interactions between people and nature, which are often shaped by social norms, institutions and markets.