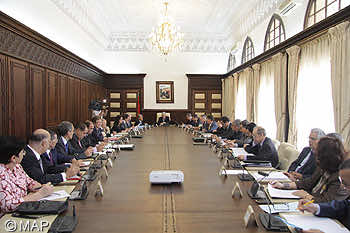 The Moroccan government expressed, on Monday, its astonishment at the spread by certain parties and people of irresponsible theses calling into question the honesty and credibility of the upcoming elections.

“Certain parties and people are striving in an unacceptable manner and with undisclosed intentions to spread irresponsible theses calling into question the integrity and credibility of the upcoming elections, in an alarmist tone, which only serves the enemies of the homeland, democracy and openness,” the government said in a statement read out by communications Minister, government spokesman, Khalid Naciri, at a press briefing at the end of the Cabinet meeting.

While expressing “astonishment at these prejudices regarding elections that have not taken place yet,” the government “deplores the fact that this attitude has supporters especially after the speech of HM King Mohammed VI, the guarantor of stability and democracy, on the occasion of the anniversary of the Revolution of the King and the People and the Youth Day.”

The Sovereign, the statement added, had said in the royal speech that the upcoming elections will take place in total transparency and honesty, urging all Moroccans to assume their historical responsibilities and put the interests of the Nation above all other considerations.”

The statement noted that the government is working to implement the content of the new Constitution that was approved by the overwhelming majority of Moroccan people, and the royal guidelines to establish an adequate climate and promote consultations and constructive dialogue with various political partners, in order to reach a consensus regarding political and legal reforms in view of the forthcoming elections so as to guarantee their transparency and honesty.