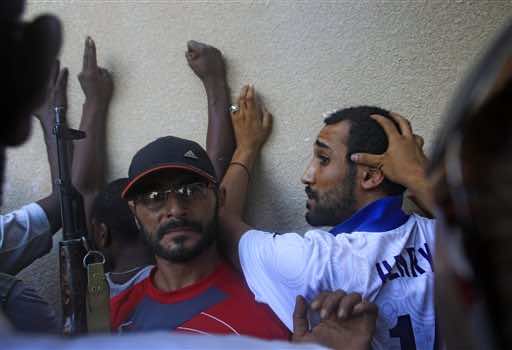 GENEVA  – Prisoners detained by Libyan rebels in the battle for Tripoli include foreigners from several African countries, a spokesman for the International Committee of the Red Cross (ICRC) said on Monday.

“Yes, there are foreign nationals and of course we are concerned about any foreign nationals who were detained,” Robin Waudo, the ICRC spokesman in Tripoli, told Reuters by phone. “They’re from Sub-Saharan Africa and the Maghreb as well.”

He did not specify their nationalities.

Deposed Libyan leader Muammar Gaddafi, whose whereabouts are unknown after rebels defeated his forces in the Libyan capital, is known to have recruited soldiers from neighbouring countries, although he has denied using mercenaries.

On Saturday, reporters saw the putrefying bodies of 22 men of African origin on a Tripoli beach. Volunteers who had come to bury them said they were mercenaries whom rebels had shot dead after they refused to surrender.

In March, young African men fleeing to Tunisia told Reuters that Gaddafi’s forces were rounding up black African migrants and forcing them to fight against the rebels.

Waudo said he did not yet have reliable figures on the overall number of prisoners in Tripoli, but the ICRC was hoping to build up a clear picture as it visited more and more of those detained in the fighting.

“The thing is, some of the detainees are in very localised places, informal places, not in formal prisons or places like this, so this is an ongoing activity that is slowly developing as the authorities slowly try to regroup detainees and put them in more formal places of detention,” Waudo said.

“Just yesterday we had a visit to 63 people who were detained by the authorities and we had a medical person who came along and medical assistance will be given to three of them.”

He declined to comment on the condition of the prisoners, but said the ICRC had been allowed to bring medical help to those who needed it.

“It’s difficult for me to speak about their treatment. I cannot tell you if they’re being treated badly or being treated well. It’s a confidential dialogue.”

Gaddafi’s opponents, the National Transitional Council, eager to preserve their image to the world and stung by accounts that captured Gaddafi loyalists had been found dead with their hands tied behind their backs, sent a text message urging followers not to abuse prisoners.