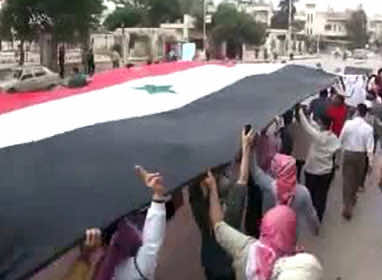 Protests erupted in many towns and cities on Tuesday morning, after Muslims performed morning prayers marking the end of Ramadan.

The Local Co-ordination Committees (LCC) activist network said six of the deaths occurred in the southern province of Deraa and one in Homs.

LCC said a “huge” protest was formed as worshippers emerged from the al-Omari mosque in Daraa and marched to the town’s cemetery. Muslims traditionally visit graves on the first day of Eid.

Large demonstrations were also reported in cities including Deraa, Idlib,Hama and Homs, and in Damascus suburbs.

A day earlier, security forces killed at least eight people and wounded dozens in raids across the country, according to opposition activists.

The rights group Avaaz said five people were killed in the town of Sarameen in Idlib province, when security forces stormed the town.

Tanks and armoured vehicles rolled into various flashpoint areas, including the towns of Rastan and Heet in Homs province.

Russia introduced a resolution on Friday that called for President Bashar al-Assad’s government to halt its violence against protesters and expedite reforms, but it made no mention of the sanctions sought by the US and European nations in a draft resolution circulated earlier this month.

Western diplomats, speaking on condition of anonymity because the meeting was private, said afterwards that it was a useful and constructive session and all 15 council members agreed on the necessity of adopting a resolution.

A Russian envoy meet Assad in Damascus on Monday and delivered a letter from President Dmitry Medvedev.Council members will continue discussing what should be included in the resolution, the diplomats said.

The Kremlin did not disclose the content of the letter, but said Deputy Foreign Minister Mikhail Bogdanov had stressed the need for “all sides to cease violence immediately” and to implement the reforms announced by Syria’s leadership.

“Russia also stressed that the opposition should accept to take part in the dialogue the authorities propose, as this is the only possible way of restoring civil peace and harmony and setting Syria on a steady path towards democratic transformation,” the Kremlin said on its website.

Ashton “expresses her continued deep concern about the violence perpetrated by the Syrian regime against peaceful demonstrators, human rights activists, and the Syrian people at large,” her spokesman said in a statement.

“She renews her unequivocal condemnation of the brutal repression”.

Rights groups say more than 2,200 people have been killed since protests began in March. The Syrian government say about 600 security personnel have also died in the unrest.