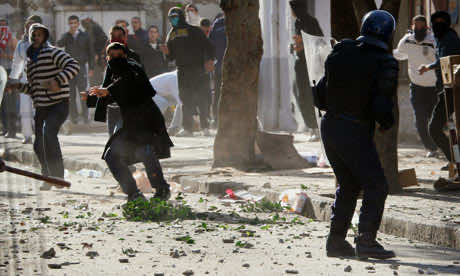 By giving the Gaddafi family refuge, Algeria’s gerontocracy is putting itself on the wrong side of history.

With three out of five countries now under new management along the north African coast, the spotlight is turning towards the remaining two: Algeria and Morocco.

In Morocco, where a new constitution was approved in July, the king’s promises of reform may succeed in staving off a mass revolt – at least for the time being. Morocco also recognised the national transitional council (NTC) in Libya with deft timing a week ago, declaring its support for “the legitimate aspirations of the brotherly Libyan people”.

That leaves Algeria out on a limb, increasingly identified with the forces of counter-revolution. Not only has it so far failed to recognise the Libyan NTC, but it is now openly providing refuge for members of the Gaddafi family.

Welcoming the Gaddafis, according to Algeria’s ambassador at the UN, was nothing more than a humanitarian gesture, in line with the traditions of desert hospitality – but we don’t have to look very far to see the politics behind it.

What happened to the Tunisian, Egyptian and Libyan regimes could easily have been the fate of the Algerian regime, too. In January, as the Tunisian uprising gathered pace, Algeria also experienced widespread disturbances – and for very similar reasons. Regular protests were still continuing on a smaller scale at the end of March.

The fact that the Algerian regime survived almost unscathed while others fell is due partly to the country’s history – many Algerians still have bitter memories of the internal conflict in the 1990s that cost 100,000 or more lives – as well as some smart handling of the situation by the authorities. Unlike Mubarak in Egypt, they lifted the 19-year-old state of emergency and, cushioned by oil and gas revenues, were able to offer economic concessions.

Writing in Foreign Policy, Lahcen Achy highlighted a couple of additional factors. The opposition, while heavily constrained by the authorities, was divided by internal disagreements, and without a common set of grievances disparate groups of protesters – students, the unemployed, civil servants, doctors, etc – pursued their own sectional interests.

Achy also noted that the Algerian security forces are more integrated into the political system than in Tunisia and Egypt. The police force is very substantial, having increased from 50,000 in the mid-1990s to 170,000 today, and is comparatively well paid and professional. Perhaps more significantly, the security forces were careful not to fan the flames by killing large numbers of protesters.

So far, the Algerian regime has been lucky, but it has probably won only a temporary respite. By continuing to back a loser (in the shape of Gaddafi), or at least failing to acknowledge that its neighbourhood is changing rapidly, it has placed itself on the wrong side of history – a point that has not gone unnoticed in the Algerian media. As a result, pressure for change in Algeria is likely to increase now, rather than diminish.

“Algeria’s 74-year-old president [Abdelaziz Bouteflika] is increasingly isolated in a fast-changing north Africa. Bouteflika, so far, has not faced a mass uprising, but the ingredients – high unemployment, anger over corruption, disillusionment with an unrepresentative political system – are all there. Rather than carrying out serious reforms, the Algerian government has responded to the Arab unrest with a mixture of money and repression.”

Unlike the toppled regimes of Tunisia, Egypt and Libya, the Algerian regime is not really a one-man (or one-family) show. It is more of a collective gerontocracy, whose members are gradually fading away without being replaced by new blood.

Assessing the state of the regime last year, “Kal”, who blogs as the Moor Next Door, wrote:

“Over the last 10 years, many of the key figures in the military hardline – Mohamed Lamari, Smain Lamari, Khaled Nezzar, Larbi Belkheir, et al – have died, retired or grown too ill to manipulate politics. What is left are the stalwarts of the praetorian order, especially the ones most well-entrenched in the ‘privatised’ industries.”

This suggests it’s only a matter of time before the regime follows its neighbours into oblivion. Possibly Algerian leaders are hoping to keep revolutionary fervour at bay by creating difficulties for the transitional government in Libya next door but, if so, they could be making a big mistake.

As smarter approach is to accept the inevitable in Libya, as Morocco has cheerfully done, and not draw attention to their hankering for the past.