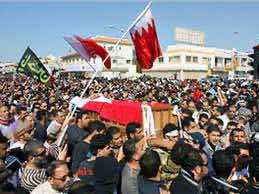 The United Nations today demanded the release of Bahraini civilians who may have been arrested during recent anti-Government protests merely for exercising their rights to freedom of speech, and called for civilian trials for those whose cases go forward.

“We stress that civilians must be tried in civilian courts and that every detained person must be charged with a recognizable criminal offence, with adequate access to a lawyer and enough time to prepare a defence,” UN High Commissioner for Human Rights (OHCHR) spokesperson Rupert Colville told a news briefing in Geneva, noting that at least 264 cases remain pending, many of which may be tried in the Court of National Safety, effectively a military court.

“We are concerned that most of the defendants in these cases may be prisoners of conscience, detained only for exercising their rights to freedom of expression and association. All such detainees must be released. We also call on the Government to release the names of all those arrested since 15 March, including their places of detention and details on the charges and status of their trials.”

Mr. Colville noted that thousands of employees have allegedly lost their jobs because of their alleged participation in anti-Government protests. “We call on the national authorities to order the immediate reintegration of such individuals and to ensure that they are compensated for their lost income,” he said.

He added that the Court of National Safety had issued harsh sentences against protesters with charges ranging from participating in an illegal gathering, or expressing hatred of the Government, to actual crimes such as murder and destruction of property.

Sentences imposed by the court in the 124 cases that have so far received verdicts include two deaths sentences and prison terms ranging from one year to life. Sixteen people were fully acquitted, and seven others were acquitted of some charges but convicted of others.

OHCHR had already spoken out in June against harsh sentences, including life imprisonment, handed down in the cases of 21 activists, saying their trials bear the marks of “political persecution.”