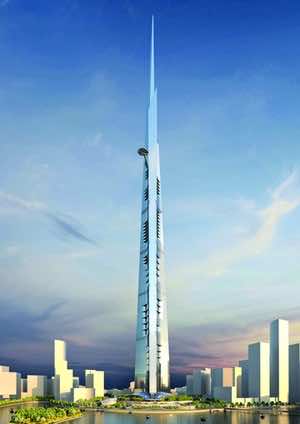 To be designed like a sprouting desert plant, architect’s task is to make sure it doesn’t sway in the wind

Riyadh: Kingdom Tower, Saudi Prince Al Waleed Bin Talal’s project to erect the world’s tallest building in Jeddah, is designed to imitate the contours of a sprouting desert plant. Adrian Smith’s task is to make sure it doesn’t sway in the wind like one.

The American architect has the right resume for the job. He already grappled with effects like horizontal wind divergence and negative pressure high above the Arabian Gulf desert when he designed Dubai’s Burj Khalifa, today’s highest tower.

“Wind can move the tower from side to side and when the movement is rapid, people inside will feel it,” Chicago-based Smith, 67, said in a telephone interview. “We design to reduce that effect.”

Kingdom Tower will rise from three separate bases in continuous slopes that end at different heights, helping to balance the building’s weight and stabilise it against winds that can reach 120 miles per hour at the top.

The 1,000-metre structure will cost $1.2 billion to build over the next five years and will include a Four Seasons hotel, apartments, offices, three lobbies on the upper floors and the world’s highest observation deck on the 157th level.

Wind is the enemy of tall buildings, Smith said. The Burj Khalifa was designed as a collection of tubes reaching various heights around the central core to help “confuse” the wind by preventing it from forming whirlpools of air, he said.

“We learned from Burj Khalifa that the more steps you have, the better you shed the vortices, and that helps stabilise the building against any horizontal wind divergence,” Smith said. “Kingdom Tower will do that by having a continuous series of slopes to the top, which is more effective but more expensive.”

The tower is designed to move about one metre side-to-side at 500 metres in the most severe storms that occur once every 50 years or so, he said. The movement will be much less in more typical weather conditions.

Smith worked at Skidmore, Owings and Merrill LLP when he designed the Burj Khalifa, which opened in January 2010. Now a partner at Adrian Smith + Gordon Gill Architecture in Chicago, the architect says his passion for reaching new heights hasn’t diminished.

“I’ve been drawing tall buildings since I was a child in California,” he said. “Each building that gets designed and built in the super-tall tower range adds about 10 per cent to the whole base of knowledge for all architects out there,” he said. Kingdom Tower will be about 50 floors higher than the Burj Khalifa and its design will constantly evolve, Smith said.

Filling a giant tower is another matter.

“This is about making a statement and not addressing any real needs in the market,” said Majid Azzam, a real-estate analyst at AlembicHC Securities in Dubai.

“However, there is a lot of concentrated wealth in Saudi Arabia and there will be enough take-up in such a large country.”

Apartment prices in Kingdom Tower will probably be comparable to luxury homes in Dubai and a two-bedroom apartment will probably sell for around 3 million riyals (Dh2.93 million), which is very high for Saudi Arabia.

The design includes about 120 serviced apartments and 385 condominiums, although that number may change as the plan progresses.