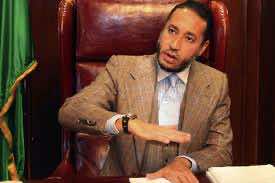 A senior NTC official has said that Saadi Gaddafi, the deposed Libyan leader’s third son, is willing to give himself up.

A senior National Transitional Council official in Libya has told Al Jazeera that Saadi Gaddafi is willing to give himself up. He is the third son of the deposed Libyan leader Muammar Gaddafi.

The NTC’s military leader in Tripoli, Abdelhakim Belhaj, said on Wednesday that Saddi called him and asked if he can surrender.

In an exclusive interview, Belhaj said the revolutionaries know for sure where some of the regime leaders are, including unconfirmed reports on where Gaddafi is.

Al Jazeera’s James Bays, reporting from Tripoli said: “We asked him [Abdelhakim Belhaj] about the military situation, remaining members of the Gaddafi family, and he said that he believes one of Gaddafi’s sons, Saadi, is preparing to surrender.

“According to Belhaj, Saddi doesn’t want to leave Libya, he wants to talk to the national council and negotiate his surrender. He thinks he knows the whereabouts of Saddi Gaddafi from the phone call. Also says he believes some senior figures of the government are now ready to surrender, such as the former prime minister.

“Belhaj made a point of saying that any of those who do surrender will be treated properly, and court cases will be held to international norms. Belhaj thought that Muammar Gaddafi is less likely to surrender, but would be treated fairly if he did. He would be held in custody with proper human rights.”

Earlier on Monday, some members of Gaddafi’s family had fled the country and gone to Algeria.

Authorities there confirmed on Tuesday that Gaddafi’s second wife Safia, his daughter Aisha, and his sons Muhammad and Hannibal were in Algeria and had been granted permission to enter based on “humanitarian grounds”.

According to AFP news agency, Aisha gave birth to a girl while in Algeria.

“I cannot confirm it, but I can comment that, especially for Hannibal, if he fled to Algiers and the Algerian authorities allowed him to do that, we’ll consider this as an aggressive act against the Libyan people’s wish,” he said.

Meanwhile, Khamis Gaddafi, another of Gaddafi’s sons, whose military unit is accused of killing dozens of detainees in Tripoli, may be placed on the international war crimes court’s most-wanted list, the prosecutor told the Reuters news agency on Monday.

Luis Moreno-Ocampo, the ICC prosecutor, said he may also apply for an arrest warrant for Khamis, after Human Rights Watch said members of the Khamis Brigade, a force commanded by him, appeared to have carried out summary executions of detainees whose bodies were found in a warehouse in Tripoli.

“We know Khamis should also be prosecuted because he was the commander of the brigade that was more active on some of the crimes,” Moreno-Ocampo said.

Moreno-Ocampo said a UN Human Rights Council commission would conduct further investigations on the ground in Libya soon and that he would base his decisions on the results.