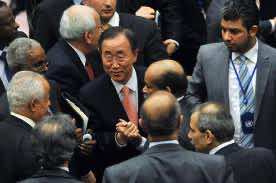 In a story that was carried by Morocco World News, Al Jazeera English reported on Monday about a leaked UN planning document revealing the possible deployment of 200 unarmed military observers, along with UN police as well as other activities in post-conflict Libya. The ten page document, first obtained by Inner City Press, a United Nations based news website, was made available on Al Jazeera’s website.

Today at the United Nations media stakeout, the Special Adviser to the Secretary General, Ian Martin, tasked these past few months for planning a UN role in post-conflict Libya, made clear that this document did not represent the UN’s current plans.

When questioned by reporters on UN plans for military observers as well as a continued NATO role, Martin said that the document referred to in the Al Jazeera story was a contingency plan that had been drawn up in the case a cease-fire between the two sides had been negotiated. “Clearly in that context it was responsible to plan for the rapid deployment of unarmed military observers if necessary. We also told the [Security] Council that depending on the security situation, deployment of unarmed military observers might only be possible if there was some kind of protection that would have to be provided other than by the United Nations.” The latter point was a response to concerns that had been raised about a recommendation in the document for continued NATO involvement.

Martin stressed that the UN no longer has any intentions of deploying military observers. He stated, “So that contingency plan has been there, but it was developed in a context which is not the context that has actually occurred. In our discussions with the NTC it is very clear that the Libyans want to avoid any military deployment by the UN or others.”

Martin emphasized that a UN role in Libya will be based on “Libyan requests”. For this reason, he noted that the United Nations had only recently started intensive planning beyond contingency planning when he, along with the Secretary-General’s Special Envoy to Libya, Abdel-Elah Al-Khatib, met last week with National Transitional Council authorities in Doha.

So far these areas where the NTC authorities have expressed an interest in UN assistance include for electoral assistance, national reconciliation and transitional justice. He also noted that the Libyan authorities have expressed interest in assistance for capacity building in policing. According to Martin, it was, however, not yet clear the form that such assistance might take, though he did not rule out the possibility it could include UN police as mentors or trainers.

The UN Special Adviser stated that the United Nations would present an initial proposal for a role in Libya to the Security Council after the international conference in Paris scheduled for Thursday, when the Secretary-General will meet with NTC authorities.

Meanwhile the Secretary-General, Ban Ki-Moon, briefed the Security Council on Libya earlier in the day. UN support to Libya is to be based on “three fundamental principles,” said the Secretary General.  He outlined these principles as Libyan national ownership, the rapid delivery and response to requests for support and effective coordination among the different governments and organizations providing aid.