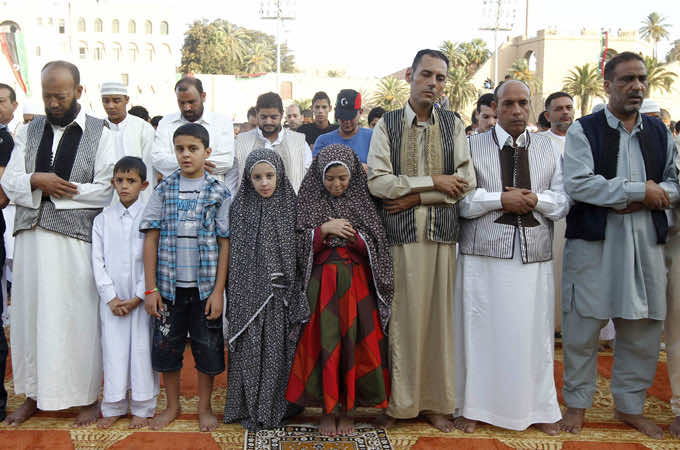 Thousands of Libyans have gathered in Tripoli to mark the end of Ramadan and celebrate Eid al-Fitr, kneeling in prayer in Martyrs’ Square as they rejoiced in the collapse of Muammar Gaddafi’s regime.

At dawn on Wednesday, families began to pour into the square, which had been dubbed “Green Square” by Gaddafi, as women ululated in triumph and spontaneous cries of joy erupted.

“This is the best holiday of my life,” said Adel Masmoudi, who at 41 was born the year Gaddafi seized power.

An imam leading the dawn prayer urged all Libyans to stand united and hailed the ousting of “the tyrant Gaddafi”, prompting jeers from the crowd at the mention of the former leader’s name.

Rebel forces had set up a security belt around the square, as armed guards patrolled the area and snipers took position on rooftops overlooking the gathering which ended peacefully later in the morning.

The Eid celebrations had began late on Tuesday with bursts of red tracer rounds fired into the sky as a substitute for fireworks.

“This is the first time we have felt relaxed in 42 years,” Amari Abdulla, 24, told the AFP news agency.

“We will celebrate as in the past but this time it is simply better. It is a new Libya.”

While anti-Gaddafi rebels claim to have “liberated” most of the country, negotiations are still underway for the surrender of regime loyalists in Sirte, Gaddafi’s hometown.

Mustafa Abdel Jalil, chairman of the rebels’ National Transitional Council (NTC), said on Tuesday that forces loyal to Gaddafi have until Saturday to surrender or face a military assault.

A senior NTC official in Libya has told Al Jazeera that Saadi Gaddafi, the third son of the deposed leader, is willing to give himself up.

Abdelhakim Belhaj, the NTC’s military leader in Tripoli,  said on Wednesday that Saddi called him and asked if he could surrender.

n an exclusive interview, Belhaj said the revolutionaries knew for sure where some of the regime leaders were, including unconfirmed reports on where Gaddafi was.

Al Jazeera’s James Bays, reporting from Tripoli said: “We asked him [Belhaj] about the military situation, remaining members of the Gaddafi family, and he said that he believes one of Gaddafi’s sons, Saadi, is preparing to surrender.

“According to Belhaj, Saddi doesn’t want to leave Libya, he wants to talk to the national council and negotiate his surrender.

“He thinks he knows the whereabouts of Saddi Gaddafi from the phone call. Also says he believes some senior figures of the government are now ready to surrender, such as the former prime minister.

“Belhaj made a point of saying that any of those who do surrender will be treated properly, and court cases will be held to international norms.

“Belhaj thought that Muammar Gaddafi is less likely to surrender, but would be treated fairly if he did. He would be held in custody with proper human rights.”

There has been speculation that Gaddafi is seeking refuge in Sirte or one of the other remaining regime strongholds, among them the towns of Bani Walid or Sabha.

“Gaddafi is now fleeing – and we have a good idea where he is,” Ali Tarhouni, a senior NTC minister said earlier, without elaborating. “We don’t have any doubt that we will catch him.”

Earlier on Monday, some members of Gaddafi’s family fled the country to Algeria.

Authorities there confirmed on Tuesday that Gaddafi’s second wife Safia, his daughter Aisha, and his sons Muhammad and Hannibal were in Algeria and had been granted permission to enter based on “humanitarian grounds”.

According to the AFP news agency, Aisha gave birth to a girl while in Algeria.

“I cannot confirm it, but I can comment that, especially for Hannibal, if he fled to Algiers and the Algerian authorities allowed him to do that, we’ll consider this as an aggressive act against the Libyan people’s wish,” he said.

In all, Gaddafi has eight biological children, a daughter and seven sons.

Meanwhile, Khamis Gaddafi, another of Gaddafi’s sons, whose military unit is accused of killing dozens of detainees in Tripoli, may be placed on the international war crimes court’s most-wanted list, the prosecutor told the Reuters news agency on Monday.

Luis Moreno-Ocampo, the ICC prosecutor, said he may also apply for an arrest warrant for Khamis, after Human Rights Watch said members of the Khamis Brigade, a force commanded by him, appeared to have carried out summary executions of detainees whose bodies were found in a warehouse in Tripoli.