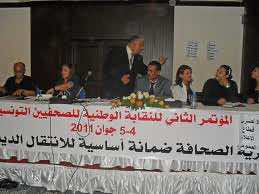 The Independent National Council for Media and Communication hosted the Tuesday (August 23rd) event where journalists, lawyers and judges gathered to convince the Constituent Assembly to accede to their requests. The assembly is due to draft a constitution after the October 23rd election.

“The new constitution must expressly include a special article on freedom of expression, journalists’ right to have access to information and news,” council president Hassan Mensi said.

He cited the first amendment to the US constitution which prevents Congress from taking any decision that would “abridge the freedom of speech or of the press”.

The council was formed July 30th with the aim of “drawing up a comprehensive strategy for the post-revolution media”.

“The 1969 constitution included a chapter on freedoms. However, these freedoms always end with the phrase ‘in the framework of what is summarised by the law’,” Mohamed Saleh Toumi explained.

The drafting of the new press law was supervised by law professor Ridha Jnaih, with contributions by the National Syndicate of Tunisian Journalists (SNJT) and some specialists from Tunisia and abroad. The law will also be reviewed by the High Commission for the Realisation of Revolutionary Goals.

“At this particular time, we have become afraid for the media and we are calling for law protection,” said Abd Karim Izaoui, a law professor at the Press and Information Sciences Institute and head of Journalist Training Centre in Tunisia.

After the January 14th revolution, many newspapers appeared, and new radio and television stations are expected to start airing programs. Many Tunisians complained about journalists’ poor training and lack of experience. The transitional government itself complained about the “media chaos”.

“The audio-visual media must be included in the constitution because we’re living in a state of chaos in the media field, and there is no law regulating media work,” Izaoui added. “As to the new press law, it stems from civil society and the current government didn’t intervene in drafting that law.”

Mensi advised journalists to establish their own press institutions, citing France’s Le Monde as an example, because “this will protect them from censorship”.

“It’s not easy for journalists to remain neutral in difficult situations,” Asia Atrousse, a journalist for As-Sabah daily, said, suggesting that some journalists may lack strength of character. She added that reforming the sector would be difficult because the people who were benefiting from the former regime are now in the forefront of the post-revolution media.

Seven religious associations criticised the new press bill and said that it poses a threat to Islam because chapter 52 criminalises the use of places of worship for party campaigning.

The Ennahda Movement has yet to express its position on the new bill.