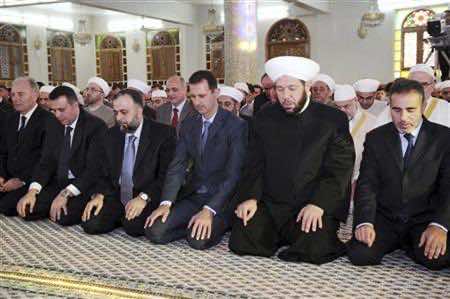 The raids took place a day after security forces killed at least four people among crowds of demonstrators pouring out of mosques in Syria after marking the end of Ramadan, the Muslim holy month in which Assad intensified a crackdown on protests.

Troops swept through several cities in Ramadan, killing scores of people and triggering Western sanctions and Arab criticism, without crushing the unrest in which the United Nations says 2,000 civilians have been killed.

The protesters have also failed to unseat Assad, but they have been encouraged by the fall of Libya’s Muammar Gaddafi and rising international pressure on Syria, including a planned European Union embargo on the oil industry, which would disrupt vital inflows of foreign currency at Assad’s disposal.

Hama has seen some of the biggest protests against 41 years of Assad family rule and was the first city assaulted during Ramadan. Authorities said the army withdrew by mid-August, but residents reported a significant military presence Wednesday.

“Several light tanks and tens of … buses parked at al-Hadid bridge at the eastern entrance of Hama. Hundreds of troops then went on foot into al-Qusour and Hamidiya neighbourhoods. The sound of gunfire is being heard,” Abdelrahman, a local activist, told Reuters by phone.

“These neighbourhoods have been among the most active in staging protests,” he added.

Another resident said Toyota pick-up trucks mounted with machineguns and buses full of troops also assembled overnight near al-Dahiriya district at the northern entrance of Hama, 205 km (130 miles) north of the capital Damascus.

“The people want the execution of the president,” a YouTube video showed dozens of protesters chanting in Hamidiya after night prayers, shortly before the raid on the district.

Most foreign media were expelled from Syria after the uprising began in March, making it hard to verify reports.

Hama, on an agricultural plain on the Orontes River, was scene of a 1982 massacre by the military, sent by Assad’s father Hafez al-Assad to crush an armed Islamist uprising.

Assad, from Syria’s minority Alawite sect, has repeatedly said force is necessary to defeat what he calls a foreign plot to divide Syria, which is majority Sunni Muslim. Authorities blame armed groups for the violence and say more than 500 soldiers and police have been killed.

The Syrian Observatory for Human Rights (SOHR), based in Britain, said Wednesday 360 civilians had been killed in Ramadan and 113 members of the army and security forces.

“We want permission to investigate those (military) deaths,” SOHR director Rami Abdelrahman said. “Some information says the security forces fired on the army because they refused to open fire (on protesters). Other information says they were killed by gunmen.”

State television aired an audio recording Tuesday of what it said were two terrorists who revealed “a full agenda of provocation and targeting police and army camps and terrorising peaceful citizens in the name of freedom and non-violence.”

In the northwestern province of Idlib on the border with Turkey, troops shot dead one villager, Hazem al-Shihadi, at a checkpoint overnight near the town of Kfaruma where army defections have increased, activists said.

Around 7,000 Syrian refugees, most of whom had fled army assaults on their towns and villages in Idlib, are housed in six camps in Turkey’s Hatay (Iskenderun) province across the border, the Euro-Mediterranean Human Rights Network said in a statement.

It said that while Turkey has treated the refugees well and has kept the border open for refugees from other parts of Syria, Ankara “considers these refugees as ‘guests’, a status that is open to interpretation and lacks the international protection that the U.N. Commissioner for Human Rights can provide.”

Syrian authorities have said that most of refugees who fled to Turkey, which put their number in excess of 10,000, had returned to their homes in Idlib after troops “cleansed” a main town in the province of “armed terrorist groups.”

Demonstrations broke out across Syria Tuesday after prayers to mark the end of Ramadan, notably in Damascus suburbs, the city of Homs, 165 km to the north, and Idlib, activists and residents said. They said security forces shot dead four people, including a 13-year-old boy, in the southern Deraa province.

“The people want the downfall of the president,” protesters shouted in the Damascus suburb of Harasta, where activists said dozens of soldiers defected at the weekend after refusing to shoot at the crowds.

Residents and activists have reported a rising number of defections among Syrian armed forces, which are drawn mostly from the Sunni majority, but are dominated by Alawite officers effectively under the command of Assad’s younger brother Maher.

They say most of the defectors have fled to Turkey or taken refuge in their home towns and villages, provoking raids by pro-Assad forces, and in some instances, armed clashes.

“Most of the defectors are keeping their heads low. They do not have access to arms and no outside support. None of Syria’s neighbours want to see armed conflict in the country, which could take years to be resolved,” said a Syrian political analyst in Damascus, who did not want to be identified.

Radwan Ziadeh, an outspoken Syrian opposition figure living in the United Sates, said Syrian Air Force Security, a secret police division that has played a major role in repressing protests, had arrested his brother in Damascus.