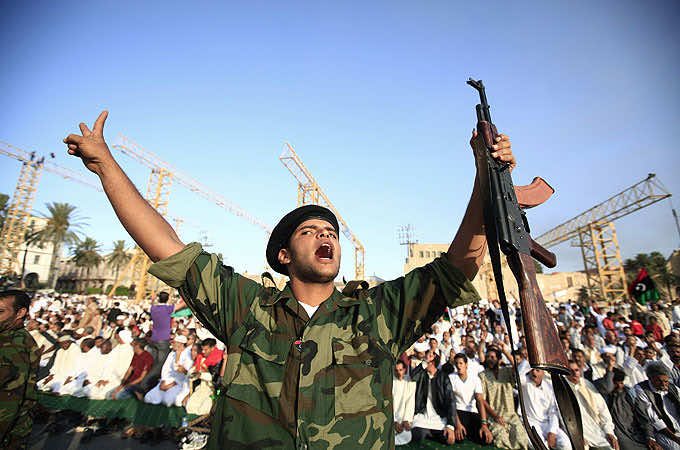 At least four Libyan fighters have been killed in the capital, Tripoli, in a blast that went off as residents, already rejoicing at the fall of Muammar Gaddafi’s regime, celebrated Eid-al-Fitr.

ome residents said it was a car bomb and the blast was carried out by Gaddafi loyalists.

“At 5:30am local time [03:30GMT] exactly, I heard an explosion,” Omar Mahmoud, a resident whose windows were shattered at his home in the Al-Andaluss neighbourhood, told the AFP news agency on Wednesday.

“The car was passing in front of my house, it hit the wall and then it exploded,” he said.

The vehicle was completely destroyed and burned by the blast, and hand grenades and rockets were scattered at the site.

Al Jazeera’s Sue Turton, reporting from Tripoli, said, “On early hours of Wednesday, we heard reports of a car bomb but now different stories have emerged.”

“A group of rebels have denied it was a car bomb; they say actually a car full of fuel was hit by celebratory gun fire, that’s what killed the four Libyan fighters,” she said.

Another group said that children had picked up grenades left on the road after the recent fighting, and that they were killed in the grenade explosions.

Our correspondent said, “The confusion is pretty much symptomatic of the feeling at the moment in Tripoli. Also, there is worry that still there are some pockets of Gaddafi loyalists in the city.”

“But over all, it is much more relaxed, checkpoints are more relaxed and shops are now opening, but fear remains that something could happen even now.