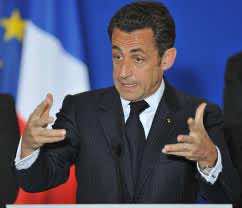 French President Nicolas Sarkozy urged fellow EU countries on Wednesday to find a united stance on the issue of Palestinian statehood for next month’s UN General Assembly, while pressuring the US to step up its efforts to sow peace in the region.

French President Nicolas Sarkozy said on Wednesday he wanted to see a united European Union voice on the issue of Palestinian statehood at next month’s United
Nations General Assembly and urged Washington to do more for peace.

“The 27 countries of the European Union must express themselves with one voice,” Sarkozy said in an opening speech to an annual conference of French ambassadors.

“The role of the U.S. is uncontested and irreplaceable, but everybody sees that it is not enough. We have to widen the circle of negotiation, think of the role and pertinence of the
quartet.”

Sarkozy said the world could not continue to leave the Palestinian peace process frozen while the Arab Spring forces change elsewhere in the region.