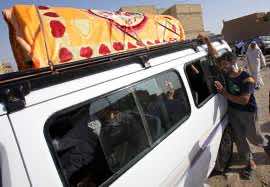 A parked car bomb exploded near a police checkpoint on a commercial street in a largely Sunni Muslim area of southwestern Baghdad on Wednesday, killing three people and wounding 20 others, an interior ministry source said.

The driver, pretending to be a shopper, parked the car on a street lined with grocers, butcher shops and other stores in the Jihad area of the Iraqi capital, the source said.

The blast hit three days after a suicide bomber posing as a beggar blew himself up in a Sunni mosque in Baghdad, killing 32 people, including a member of parliament, and wounding 39 others, according to health ministry figures.

Violence has fallen sharply since the peak of Iraq’s sectarian slaughter in 2006-07 but bombings and other attacks by Sunni insurgents and Shi’ite militias remain a daily occurrence.

Sunni politicians and security officials blamed Sunday’s mosque attack on al Qaeda’s Iraqi affiliate and said it was an attempt to silence moderate Sunnis allied with the government.