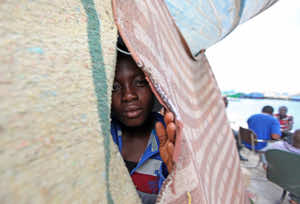 SIDI BILAL – In an abandoned port on the outskirts of Tripoli, a young woman timidly peeks out from behind the blanket that forms a wall in her improvised home. She is one of hundreds of migrants who have gathered in this makeshift camp since a popular uprising to overthrow dictator Muammar Gaddafi spread to the Libyan capital in August.

The migrants see strength in numbers and hope they can escape the arbitrary detentions, arrests and beatings that many of their fellow migrants have been subjected to.

Racism against blacks has a long history in Libya, but has been a particular problem for sub-Saharan migrants – nationals from countries like Chad, Niger, Sudan, Senegal, Mali and Nigeria – since the uprising began in February. Rebels who fought for Gaddafi’s ouster accused him of using black African mercenaries to help quell the uprising.

Since then, the rebels or their supporters – there’s no chain of command or uniform to identify them absolutely – have arbitrarily arrested, robbed and/or beaten hundreds of migrants, according to testimonies from fleeing migrants, and reports by human rights organizations and journalists. Many migrants have had their money, mobile phones and passports taken.

Despite urging restraint on the part of its supporters, the rebel movement-turned-incoming-government (the ruling National Transitional Council or NTC) has been criticized for not doing enough to halt incidents of racial violence and arbitrary detention. One rebel told IRIN: “If we see black skin, we’ll arrest them and give them to the NTC.”

In this camp in Sidi Bilal, 35km west of Tripoli, the migrants are seeking shelter in abandoned boats, hanging blankets from the hulls to create makeshift walls. When armed rebels come to the area, the migrants retreat to their improvised homes. They fear rape or more arrests. One migrant told IRIN the armed men “beat the hell out of” them.

Médecins Sans Frontières brings fresh water to the camp. Some locals donate food for the migrants to cook; local children sell them chickens and cigarettes. There is just one toilet in a nearby building.

This is just one of several camps made up of migrants who do not have the means to go back home, despite a hostile environment here. Some of those who are able to return have faced their own difficulties in their home countries. Others are still trying to get out of Libya, in what the International Organization for Migration (IOM) still considers an emergency situation.

Having already helped with the evacuation of thousands of migrants, the IOM is still looking to reach vulnerable communities in areas like Sebha, 650km southwest of Tripoli, still reportedly controlled by Gaddafi loyalists.

According to the IOM, Chadians, Nigeriens, Nigerians and others have sought protection at the IOM centre in Sebha, but with no electricity, fuel, and little food or water, the situation is becoming increasingly difficult. “The migrants are very scared and threatened,” said IOM Chief of Mission for Chad Qasim Sufi in a communiqué.

Racism past and present

Concern over violence and discrimination towards darker-skinned Libyans and sub-Saharan African migrants has been mounting since the early stages of the conflict in Libya.

While Col Gaddafi and his loyalists were accused early on of pushing a xenophobic message, accusing rebels from the outset of being controlled by “non-Libyan” elements and religious extremists, the reputation of the NTC has been badly tainted by charges of racism.

Well before the outbreak of hostilities in Libya in February 2011, there were long-standing reports of Gaddafi’s use of Chadian soldiers, Tuareg warriors from northwest Africa, and other non-Libyan combatants, within the Libyan military, notably the Khamis Brigade, fronted by one of Gaddafi’s sons. There have also been reports of over 500 soldiers from the Western Saharan Frente Popular de Liberación de Saguía el Hamra y Río de Oro (POLISARIO) being detained by the NTC, accused of being mercenaries in the pay of Gaddafi. NTC supporters have persistently maintained that such elements played a leading role in checking the rebel advance, providing Gaddafi with a last line of defence.

Human rights campaigners and media commentators in sub-Saharan Africa have pointed out that incidents of extreme racism are nothing new in Libya. The testimonies of prisoners and fleeing migrants carry strong echoes of those who fled Libya in 2000 after over 130 people, mainly from West African countries, were killed in outbreaks of what appeared to be ethnically-motivated violence. Gaddafi’s administration was accused of being at best negligent, at worst complicit, while Gaddafi himself was denounced for preaching pan-African brotherhood abroad while presiding over racial pogroms at home.

Since the early 1980s, large migrant populations from both Libya’s immediate neighbours, Chad and Niger, have been joined in Libya by thousands more from countries like Senegal, Mali, Niger and Ghana.

The influx coincided with a period of international isolation, Gaddafi playing his self-created role as a champion of African unity against a background of sanctions and strained relations with many of his Arab counterparts. Libya was heavily involved in the Community of Sahel-Saharan states (CEN-SAD), which preached regional solidarity and stressed a commitment to the free movement of persons and goods. Libya became both a crucial stepping-off point for migrants heading to southern Europe, notably Italy, but also a destination in its own right, particularly for those seeking job opportunities in a fast-expanding economy, taking on both mainly unskilled jobs or finding openings in the informal sector.

According to Jen-Philippe Chauzy, spokesman for the IOM, migrant workers were drawn to Libya for economic reasons, but tended to live on the margins. “The migrants faced enormous difficulties in Libya prior to the crisis,” Chauzy told IRIN. He pointed out that the vast majority of sub-Saharan Africans were in Libya as undocumented migrants. “They were hired and fired by the day, trying their best to survive economically.” Most immigrants from sub-Saharan Africa were smuggled into Libya illegally, not registering with their embassies, inevitably vulnerable to exploitation, said Chauzy.

While the Libyan authorities were fairly lax on definitions of legal and illegal immigration, there were several waves of deportations. In both 1995 and 2008, the Libyan government announced its intention to expel one million immigrants. While those targets were not reached, Libya faced mounting criticism for its treatment of refugees. In its World Refugee Survey for 2009, the US Committee for Refugees and Immigrants noted the existence of 10 detention camps for illegal migrants.

Libya was accused by human rights organizations of currying favour with Italy and other European states in clamping down on illegal immigration, often using brutal methods. Concerns were also raised about growing racism and the stigmatization of immigrant communities accused of involvement in crime and spreading HIV/AIDS.

Chauzy said much more needed to be done to support reintegration programmes for migrants returning to countries like Niger and Chad in the current context, noting that families were now adapting to living without remittances sent from Libya, which played a key role in sustaining family budgets. “These countries are being left alone to bear the burden of the Libyan crisis,” Chauzy warned.