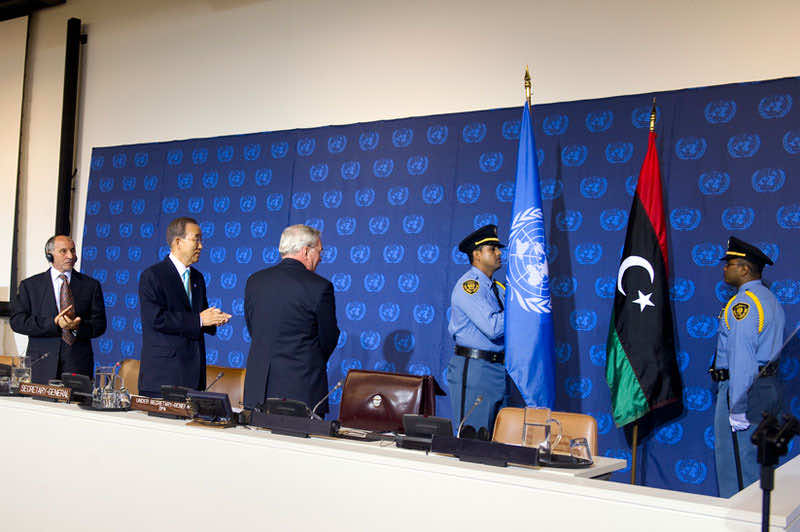 A United Nations summit in support of Libya today backed the transition plans of the country’s new authorities and pledged their ongoing support to help the North African country establish the rule of law, uphold key human rights and promote both economic recovery and public security.More than 50 heads of State or government took part in the meeting, hosted by Secretary-GeneralBan Ki-moon at UN Headquarters in New York and organized as the months of conflict between pro-democracy groups and forces supporting the ousted regime of Colonel Muammar al-Qadhafi come to an end.Officials from the National Transitional Council (NTC) of Libya, which have become the interim authorities, outlined some of their plans to the meeting – held just days after the Security Council authorized the creation of the UN Support Mission in Libya (UNSMIL) for an initial three-month period.

Mustafa Abdel Jalil, President of the NTC, told the gathering that the key short-term challenges include eliminating the last pockets of pro-Qadhafi resistance, meeting the demand for reconstruction, and compensating families who lost loved ones during the months of conflict.

In a statement issued after today’s meeting, participants commended the Libyan people for having “fought heroically for the respect of fundamental human rights, rule of law, dignity and freedom of expression.”

They also voiced support for the NTC’s plans for the transition period and promised to mobilize international support in such areas as elections, constitution-making, human rights, security, gender issues and economic recovery.

The participants urged the NTC to move swiftly to form an inclusive government “that reflects the full diversity of Libyan society and aims to build a new, united, democratic and pluralistic Libya in which human rights, fundamental freedoms and justice will be guaranteed.”

The authorities must “fully abide by their commitment to respect international humanitarian and human rights law in the transitional process,” including protecting the rights of all minorities, including migrant workers from sub-Saharan Africa.

They also noted that the UN and the Security Council should guide the international community’s efforts in supporting the transition, emphasizing that the transition must be a Libyan-led process.

A “Friends of Libya” group – to be co-chaired by the interim Libyan authorities and either Mr. Ban or Ian Martin, the head of UNSMIL – will meet periodically in Tripoli, the capital, to support stabilization and reconstruction efforts.

In his address to the meeting, Mr. Ban welcomed the installation of a new flag for Libya, which now flies outside UN Headquarters along with the standards of all other UN Member States.

“We offer congratulations and best wishes for the future,” the Secretary-General told the representatives of the NTC. “For the past seven months, you have fought courageously for your fundamental rights and freedoms.

“Women and young people were in the vanguard, demanding a say in the political and socio-economic life of their country. As you look to the future, I want you to know that the United Nations will support you in every way we can.”

He noted that the challenges for Libya remain huge, and said the first priority has to be establishing peace and security across the country.

“We are encouraged that so many Libyans, from so many communities, have laid down their arms and are working together to build their nation. We urge those that have not done so to join them.”

In a separate meeting with Mr. Jalil, Mr. Ban described the extent of participation by Member States in today’s meeting “as a testament of the interest of the international community in the success of Libyan efforts to build a democratic and prosperous nation.”