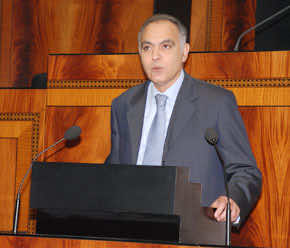 Moroccan Minister of Economy and Finance, Salaheddine Mezouar, on Tuesday announced the creation of a national solidarity fund aimed at supporting people with special needs and vulnerable people.

Communications Minister, spokesman for the government, Khalid Naciri, said, after the weekly cabinet meeting, that Mezouar pointed out during the meeting that this project comes in implementation of HM King Mohammed VI’s instructions to enhance social solidarity, spur human development, promote employment and social housing and provide direct support for vulnerable people.

This initiative is the first step towards reviewing the state’s subsidies system, Naciri said, adding that the rural development fund will cover mountainous areas, and that it will reach one billion dirhams ($122 million).

He said that one billion dirhams will be earmarked to finance employment, with 24,714 jobs to be created.

Mezouar told the meeting the 2012 appropriation bill forecasts a growth rate of 4.8%, and an inflation rate of 2% and was prepared on the basis of an oil barrel price of 100 dollars.

He also said that the deficit will be contained at 4% of gross domestic product.