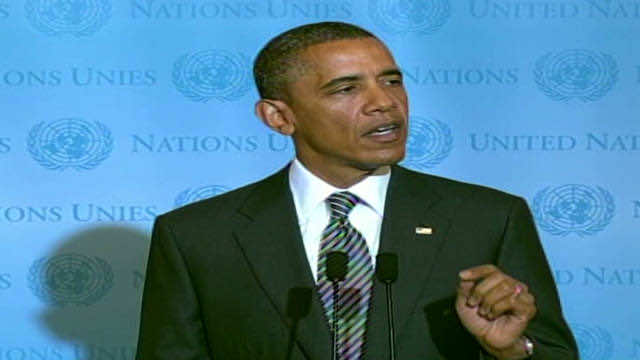 U.S. President Barack Obama told members of the U.N. General Assembly that he is frustrated by the lack of progress in Israeli-Palestinian peace efforts, but he said the two sides must reach an agreement together and “peace depends on compromise.”

Obama spoke as Palestinian Authority President Mahmoud Abbas is urging the United Nations to recognize an independent Palestinian state, a move that put the Obama administration in a tight spot diplomatically.

Obama and Abbas are scheduled to meet later Wednesday. But Obama said peace won’t come through statements or resolutions at the United Nations.

“Peace depends upon compromise among peoples who must live together long after our speeches are over, and our votes have been counted,” he said.

“One year ago, I stood at this podium and called for an independent Palestine. I believed then — and I believe now — that the Palestinian people deserve a state of their own. But what I also said is that genuine peace can only be realized between Israelis and Palestinians themselves.”

He said that a year later, despite extensive U.S. efforts, “the parties have not bridged their differences.”

“Faced with this stalemate, I put forward a new basis for negotiations in May. That basis is clear, and well-known to all of us here. Israelis must know that any agreement provides assurances for their security. Palestinians deserve to know the territorial basis of their state.”

He said the “question isn’t the goal we seek — the question is how to reach it. And I am convinced that there is no shortcut to the end of a conflict that has endured for decades.”

For the world in general, Obama said, “the tide of war is receding.”

“When I took office, roughly 180,000 Americans were serving in Iraq and Afghanistan,” Obama said. “by the end of this year, that number will be cut in half, and it will continue to decline. This is critical to the sovereignty of Iraq and Afghanistan, and to the strength of the United States as we build our nation at home.”

He said the belief that change could come through violence died with al Qaeda leader Osama bin Laden’s demise. He also said this “has been a difficult decade. But today, we stand at a crossroads of history with the chance to move decisively in the direction of peace.”

Obama spoke amid dramatic changes across the globe in the past year, particularly in the Arab world, with longtime strongmen toppled in Tunisia, Egypt and Libya and widespread unrest in Syria and Yemen.

He said “we must work with Yemen’s neighbors” to generate a “peaceful transition of power” from President Ali Abdullah Saleh. And there is “no excuse for inaction” regarding the Syrian regime’s crackdown on protesters, he added. “Now is the time for the United Nations Security Council to sanction the Syrian regime, and to stand with the Syrian people.”

As for Israel and the Palestinians, Obama told Turkish Prime Minister Recep Tayyip Erdogan in talks on Tuesday that the Palestinian effort would not advance a “shared goal” of resolving the decades-old Israeli-Palestinian conflict, said Liz Sherwood-Randall, a top National Security Council aide.

Ben Rhodes, the council’s strategic communications director, said the U.S. goal was to get Israel and the Palestinians back to direct negotiations.

“As we’ve said repeatedly, what we’re focused on is how do we get a basis for direct negotiations that can actually achieve a Palestinian state,” Rhodes told reporters Tuesday evening.

Rhodes said the sweeping changes across the region will take up much of Obama’s address to the General Assembly on Wednesday morning and “speak to the momentum of democratic change in the world.”

“There’s been a seismic change in the past year, and I think the discussions today underscore that,” he said.

Obama also urged Erdogan to continue work toward patching up Turkey’s strained relations with Israel, a vital U.S. ally in the Middle East, and expressed condolences for the deaths of at least three people in a suspected bombing in Ankara on Tuesday, Sherwood-Randall said. And he led a meeting of an open government partnership with Brazil and other countries dedicated to improving government transparency around the world.

Also, Obama addressed a meeting of the Libya Contact Group, telling the gathered leaders, including U.N. Secretary-General Ban Ki-moon, that the NATO-led military campaign in Libya that helped oust Moammar Gadhafi from power was an example of modern global cooperative action.

“This is how the international community should work in the 21st century — more nations bearing the responsibility and the costs of meeting global challenges,” Obama said. “In fact, this is the very purpose of this United Nations. So every nation represented here today can take pride in the innocent lives we saved and in helping Libyans reclaim their country. It was the right thing to do.”

Obama sought to reinforce a foreign policy strategy that emphasizes cooperation and shared responsibility after what has been criticized as a “might makes right” posture by the United States in past decades.

“The Obama administration has dramatically changed America’s course at the United Nations to advance our interests and values and help forge a more secure and prosperous world,” declared a White House document released Tuesday. “We have repaired frayed relations with countries around the world. We have ended needless American isolation on a range of issues. And as a consequence, we have gotten strong cooperation on things that matter most to our national security interest. ”

The document cited “concrete results” at the United Nations that it said advanced “U.S. foreign policy objectives and American security,” including:

— The stiffest U.N. sanctions ever against Iran and North Korea;

— Efforts to stop the proliferation of nuclear weapons and materials;

— The Libya intervention and subsequent efforts to aid the political transition there;

— The peaceful independence of Southern Sudan; and,

— U.N. assistance in Afghanistan and Iraq.

In addition, the White House document said the United States is the largest donor of humanitarian assistance for the Horn of Africa famine, with most of the $600 million provided so far funneled through U.N. agencies.

On Israel, it said, the Obama administration has “consistently and forcefully opposed unbalanced and biased actions” in the Security Council, the U.N. General Assembly and throughout the U.N. system.

Before Obama spoke to the Libya Contact Group, the nation’s new flag was raised, reflecting the leadership change from Gadhafi to the National Transitional Council, prompting a standing ovation in the room.

“Libya is a lesson in what the international community can achieve when we stand together as one,” Obama told his fellow leaders. “As I said at the beginning of this process, we cannot and should not intervene every time there’s an injustice in the world. Yet it’s also true that there are times where the world should have and could have summoned the will to prevent the killing of innocents on a horrific scale. And we are forever haunted by the atrocities we did not prevent, and the lives we did not save. But this time was different. This time, we, through the United Nations, found the courage and the collective will to act.”

Obama also lauded the Arab League for requesting the U.N.-sanctioned intervention in Libya, as well as “Arab states who joined the coalition, as equal partners.”

He pledged continued U.S. support for the NATO-led military mission and humanitarian assistance, and urged the Libyan people to reject “violent extremism” as they embark on democratic transition.

“To the Libyan people, this is your chance,” Obama concluded. “And today the world is saying, with one unmistakable voice — we will stand with you as you seize this moment of promise; as you reach for the freedom, the dignity and the opportunity you deserve.”