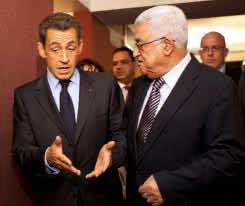 The French and U.S. presidents planned to heap pressure on their Palestinian counterpart Wednesday in a concerted push to persuade Mahmoud Abbas to end his bid for full U.N. membership and to instead seek upgraded status in the world body.

Nicolas Sarkozy, the French leader, and President Barack Obama will make their pitches during speeches at the opening session of the U.N. General Assembly. Obama will likewise argue in private against the Palestinian drive for U.N. membership when he meets with Abbas on Wednesday.

U.S. officials conceded they cannot stop Abbas from officially launching his case for the Security Council’s approval of the statehood effort, but also make the case for the Palestinian leader to essentially drop the move for stateood recognition after delivering his letter of intent to the U.N.

Abbas was expected to deliver a formal request for statehood recognition on Friday when he speaks to the General Assembly. But it could take weeks or months for the U.N. to act on the Palestinians’ request.

“The president will say, frankly, the same thing in private that he’ll say in public, which is that we do not believe that this is the best course of action for achieving Palestinian aspirations,” White House deputy national security adviser Ben Rhodes said.

And while Obama will formally ask Abbas not to pursue the statehood bid, the mission is actually directed at containing the fallout by urging the Palestinian leader not to push for an actual vote in the Council, where the U.S. has promised a veto. A delay would give international peacemakers time to produce a statement that would be the basis for resumed Israeli-Palestinian negotiations.

Sarkozy met with Abbas on Tuesday, and diplomats close to the talks said the French leader told the Palestinian leader that he would outline a proposal for the Palestinians to seek upgraded status with the General Assembly, where no member holds a veto. The resolution would be designed to make Palestine a non-member observer state, raising its status from that of permanent observer. The diplomats spoke on condition of anonymity to discuss private talks.

With Abbas determined to seek membership rather than upgraded status, the Palestinian delegation relentlessly knocked on diplomatic doors at the U.N. trying to sell their case for international recognition.

Netanyahu, issued dire warnings against hasty action as he boarded his jet for New York. Obama plans to meet with Netanyahu as well as Abbas.

The issue of the unilateral Palestinian declaration of statehood, born of decades of frustration and failed negotiations with Israel, has consumed diplomats who are gathering for Wednesday’s opening of the annual U.N. General Assembly ministerial meeting.

Abbas has rejected all attempts to steer him away from formally submitting an application for full U.N. membership.

He said he would warn world leaders against prematurely establishing a Palestinian state when many issues in the conflict must still be resolved. He did not elaborate, saying this would be the focus of his speech to the U.N. on Friday, scheduled shortly after Abbas speaks.

With the Palestinian issue nearing a diplomatic and political crisis, American diplomats have worked at a furious pace to lure the Palestinians back to negotiations, knowing a U.S. veto was certain to inflame anti-American sentiment in the Arab world.

Under a new approach that has been pulled together in three days of meetings in New York, the Quartet of Mideast peace mediators _ the U.S., European Union, United Nations and Russia _ would issue a statement addressing both Palestinian and Israeli concerns and setting a timetable for a return to the long-stalled peace talks, U.S. officials said.

Israel would have to accept its pre-1967 Mideast War borders with land exchanges as the basis for a two-state solution, and the Palestinians would have to recognize Israel’s Jewish character if they were to reach a deal quickly, officials close to the talks said. The officials spoke on condition of anonymity to discuss ongoing diplomacy.

European officials, supported by the United States, were outlining the compromise agreement to the Israeli and Palestinian governments, and asking for tough concessions from each. That was creating undertones of pessimism that mediators would be able to bring Israel and the Palestinians back to the negotiating table. The goal would be a comprehensive agreement.

The Palestinians would be allowed to deliver their letter of request Friday to the United Nations, but would agree not to act on it for a year or withdraw it at a later point. That would allow Abbas to save face and prevent an embarrassing defeat that might empower his Fatah party’s rival faction, the militant islamic group Hamas, which is considered a terrorist group by Israel and the United States.

The Palestinians could also go to the U.N. General Assembly, where they have overwhelming support, but would have to seek instead some form of intermediate upgrade of their status that would stop short of a full recognition of statehood.

And the quartet, with Israel and the Palestinians’ advance approval, would give the two sides a year to reach a framework agreement, based on Obama’s vision of borders fashioned from Israel’s pre-1967 boundary, with agreed land swaps. The statement would also endorse the idea of “two states for two peoples, Jewish and Palestinian,” which would be a slightly amended version of Israel’s demand for recognition specifically as a “Jewish state.”

Were the Palestinians to bow to the ideas of Obama and Sarkozy, they would become a non-member observer state, a status similar to that of the Holy See. That would give them an opportunity to seek membership in U.N. agencies and join treaties, including the Rome statute that established the International Criminal Court.

But Mohammed Ishtayeh, an Abbas aide, said Lebanon’s President Michel Suleiman, whose country holds the Security Council presidency this month, urged the Palestinian leader at a meeting Tuesday to proceed with the application for U.N. membership.

Ishtayeh said Abbas’ discussions Tuesday with Sarkozy and British Foreign Secretary William Hague “focused on what can be done to avoid going to the Security Council,” adding that “some still believe that a way out can be found.” But he said Abbas made it clear that the discussions should be focused on the aftermath of the Palestinian application for recognition to the Security Council.