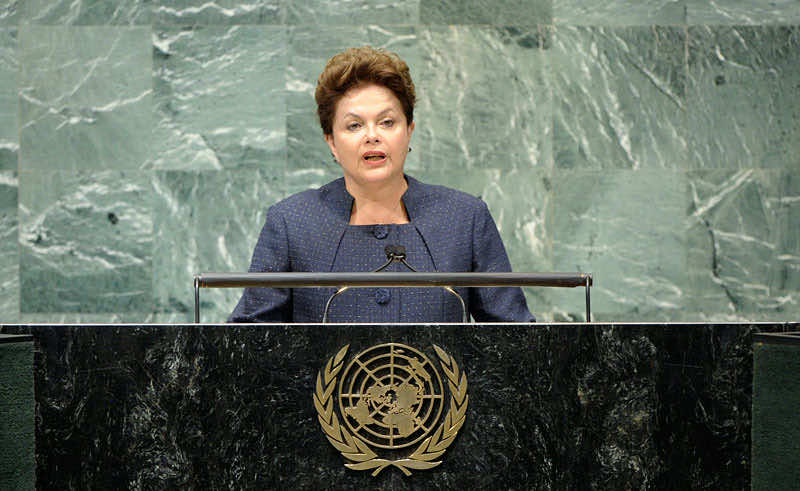 Unless governments take urgent steps to deal with the ongoing global economic crisis, “a grave political and social rift” could open up between countries and peoples, Brazilian President Dilma Rousseff warned world leaders gathered today at the General Assembly.Speaking at the opening of the Assembly’s annual General Debate, Ms. Rousseff called on the international community to find “collective, rapid and real solutions” to the crisis, particularly the large numbers of unemployed people worldwide.

“This crisis is too serious to be managed by a small group of countries,” she said, stressing the need for the United Nations, multilateral institutions such as the International Monetary Fund (IMF) and the G-20 bloc, and individual countries to more closely coordinate their response to the current economic strife.

“It is not for lack of resources that the leaders of the developed countries have not yet found a solution to the crisis… It is the lack of political resources and of clarity of ideas that are to blame.

“Part of the world has not yet found the balance between appropriate fiscal adjustments and proper and precise fiscal stimuli to demand and growth. They are caught in the trap that does not distinguish between partisan interests and the legitimate interests of society.”

Ms. Rousseff warned that if a rift opened, it “would be unprecedented, capable of causing serious imbalances in the relationship among people and among nations.”

She said the solution to the debt crisis engulfing many countries “must be combined with economic growth. There are glaring signs that many advanced economies are on the threshold of recession, which will significantly hinder the solving of their fiscal problems.”

The global priority “must be resolving the problem of those countries facing sovereign debt crises and turning back the current recessive tide.”

The Brazilian President called on affluent nations to introduce coordinated policies to stimulate the economies of those countries especially weakened by the crisis, and urged countries with high surpluses to strengthen their domestic markets and adopt more flexible exchange rate policies for their currencies to contribute to a “rebalancing of global demand.”

She also pressed for the reform of multilateral financial institutions to allow the greater participation of the so-called emerging countries, “who are chiefly responsible for growth in the global economy.”

Ms. Rousseff – who assumed the presidency of her country in January – today became the first woman to open the General Debate. In a tradition stretching back to the early days of the UN, a Brazilian representative has always been the first speaker.

Noting “this historic moment,” Ms. Rousseff said she shared “this feeling with over half of the human beings on this planet who, like myself, were born women and who, with tenacity, are occupying the place they deserve in the world.”