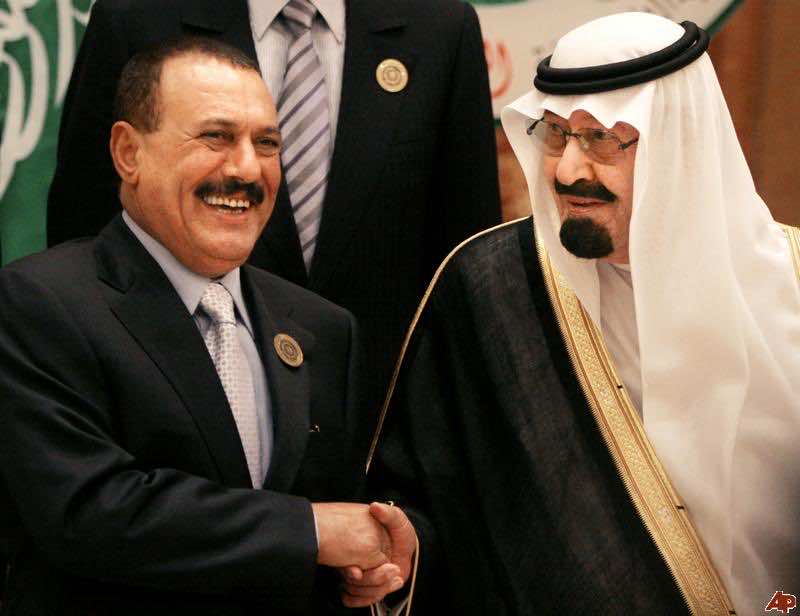 Saudi Arabia, the regional power with the weight to influence Yemen’s political direction, seems unable to decide on whether to press President Ali Abdullah Saleh to quit, a move which could spare his country the specter of civil war.

Analysts say the ruling al-Saud family looks split over how to impose its influence on a neighbor which harbors active al Qaeda groups and could split along regional and sectarian fault-lines, threatening chaos in vulnerable oil shipping lanes in the Red Sea and Gulf of Aden.

Badly burned in a bomb attack, Saleh has been in the Saudi capital Riyadh since June, living in a political limbo where he is neither firmly in exile nor fully in command of an unraveling nation.

While there appears to be broad agreement among the al-Saud ruling family that their old ally against al Qaeda must go, they disagree over who will be better able to control a country entering its ninth month of a revolt against Saleh’s 33-year autocratic rule.

“There’s a clear difference of opinion on how they want to see Yemen post-Saleh,” said Ghanem Nuseibeh, a partner at Cornerstone Global consultants. “There are those in the regime who are more comfortable with a more democratic Yemen … and others who don’t want that to happen.”

Some 75 people have been killed in Yemen since Sunday as violence has escalated from shootings at protesters into fighting between pro- and anti-Saleh armed factions, raising fears of imminent civil war.

Saleh, a guest in a lavish, marbled government palace in Riyadh accompanied by a large entourage of security staff and political aides, has so far resisted American, European and Gulf entreaties to step aside.

Analysts believe all top members of the Saudi monarchy are now united around the idea of pushing Saleh from power — but have yet to agree on which of Yemen’s many tribal, military and political factions to throw Riyadh’s weight behind.

“It is hard in a tribal society with many parts to know who the successor regime and players are that you want to support,” said Robert Jordan, a former U.S. ambassador to Riyadh.

“But I think the Saudis played a constructive role in offering Saleh medical treatment in Riyadh and seeing to it that he stays there (rather than return to Yemen).”

Asaad al-Shamlan, a political science professor in Riyadh, said: “Saudi Arabia wants a stable Yemen with a strong government which is able to control its territory and won’t give room to terrorist groups like al Qaeda.”

The world’s No. 1 oil exporter regards its long, rugged and porous border with impoverished Yemen at the tip of the Arabian Peninsula as its worst security threat.

Yemen’s tribal interior has become a haven not only for al Qaeda militants dedicated to overthrowing the Saudi monarchy but also gunmen of the Shi’ite Muslim Zaydi sect whose war with Saleh in 2009 briefly spilled over into the kingdom.

A tenuous ceasefire took hold in Sanaa on Wednesday, and opposition and government sources said negotiations were continuing on a plan devised by Gulf neighbors to usher Saleh out of office, an initiative he has backed out of three times.

Saleh met Saudi King Abdullah on Monday along with top officials, but there are no signs that any deal was reached.

DIVISIONS AMONG THE AL SAUD

Riyadh’s Yemen policy was once dominated by Crown Prince Sultan, but since he has fallen ill in recent years other princes and government bodies have become more closely involved.

Historically, leading members of the royal family have cultivated their own patronage networks among Yemeni tribesmen and politicians with gifts of cash and diplomatic influence.

“The question of Yemen for Saudi Arabia is fundamentally not a foreign policy question, it’s a national security question with a foreign policy aspect,” said al-Shamlan. “That’s why there are many organs of the Saudi government interested in it.”

King Abdullah is the ultimate decision maker, but he is in his late eighties and suffered a debilitating back problem late last year. He has delegated some of the Yemen policy to the head of Saudi intelligence, Prince Muqrin.

Aides to Saleh, who is 69, brush aside suggestions his power has been limited by his sojourn in Riyadh, maintaining he remains in control of the Yemeni government through constant phone conversations with officials and his family.

In numerous television broadcasts, carefully orchestrated to show his health is improving since he first appeared burned and swaddled in bandages, Saleh has vowed to come home.

” will definitely return to his homeland when he finishes his convalescence,” said Abdul al-Janadi, Yemen’s deputy information minister.

Yemen’s protesters say they are fighting for a democracy to replace a corrupt, nepotistic ruling elite under Saleh that has stunted the nation’s development. Unemployment has rocketed above 35 percent, 40 percent of Yemenis scrape by on two dollars a day or less, while a third suffer malnutrition.

A wily political survivor who once likened ruling Yemen to “dancing on the heads of snakes,” Saleh has so far managed to evade signing a power transition plan brokered by his wealthy Gulf neighbors and has not relinquished control over Yemen’s security apparatus via his sons and nephews.

Indeed, Saleh appears to understand well the dynamics driving Saudi Arabia’s Yemen policy — that it needs Yemen to be neither too weak nor too strong.

“As Saleh is a guest, there are some traditional customs that are applicable here,” said Shamlan. “I don’t think he can be held in some sort of restriction.”