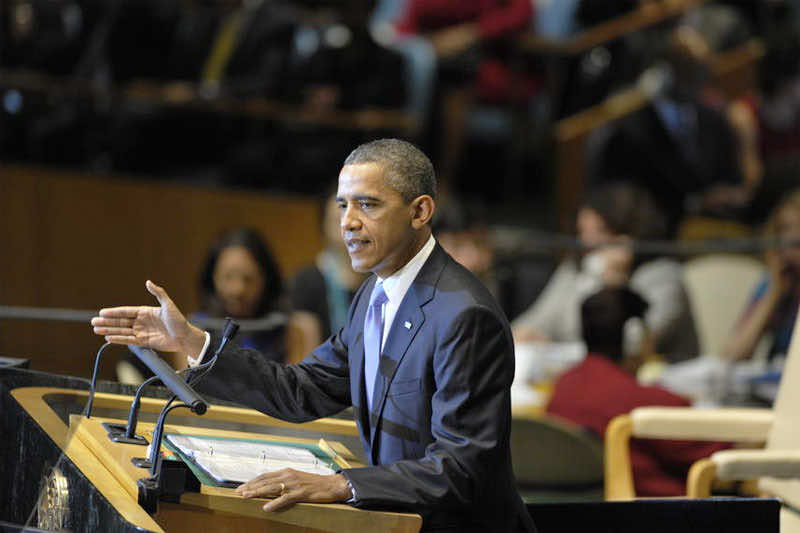 Peace between Israel and the Palestinians can only be attained through negotiations, United States President Barack Obama told the General Assembly today, urging both sides to make compromises to break the current deadlock and saying that “statements and resolutions” at the United Nations will not resolve the conflict.“Ultimately, it is Israelis and Palestinians who must live side by side. Ultimately, it is Israelis and Palestinians – not us – who must reach agreement on the issues that divide them: on borders and security; on refugees and Jerusalem,” Mr. Obama said in his speechto the General Assembly’s annual general debate.He stressed that Palestinians deserved their own State and that Israel for its part deserved recognition and normal relations with its neighbours.

“Friends of the Palestinians do them no favours by ignoring this truth, just as friends of Israel must recognize the need to pursue a two-State solution with a secure Israel next to an independent Palestine.”

The fact that each side had legitimate aspirations was one of the reasons why it has been difficult to make peace, Mr. Obama said.

Turning to nuclear non-proliferation, Mr. Obama said the US will continue to work for a ban on the testing of nuclear weapons and the production of fissile material needed to make them.

“But if they continue down the path that is outside international law, they must be met with greater pressure and isolation,” he said.

Mr. Obama hailed the recent progress made towards democracy in North African and the Middle East, including the dramatic political changes in Tunisia, Egypt and Libya, and the groundswell of demands for greater freedoms in Syria, Yemen and Bahrain.

“Something is happening in our world. The way things have been is not the way that they will be. The humiliating grip of corruption and tyranny is being pried open. Dictators are on notice.”

He pledged that the US will stand up for universal rights that have been embraced by the General Assembly, and continue to support States in transition to democracy with greater trade and investment so that freedom is followed by economic opportunities.