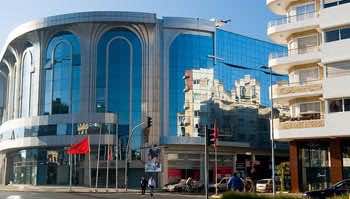 Bank lending to Morocco rose at the fastest pace in the Arab world as the kingdom steers clear of political turmoil that toppled regimes in Libya, Tunisia and Egypt.

International loans to the country climbed $1.3 billion, or 14 percent, in the first quarter, compared with the 0.3 percent increase in total credit to Africa and the Middle East, the Bank for International Settlements in Basel, Switzerland, said in a report published Sept. 18. Advances to Libya dropped 37 percent and those to Egypt fell 14 percent. The yield on Morocco’s 4.5 percent eurobond due October 2020 declined 11 basis points to 5.99 percent today from the peak in February.

Moroccans approved constitutional changes in July proposed by King Mohammed VI to transfer more power to the parliament, forestalling uprisings similar to those that ousted Libya’s Muammar Qaddafi and Egypt’s Hosni Mubarak. The International Monetary Fund predicts political reforms will help the nation’s economy grow 4.6 percent this year, up from 3.7 percent in 2010.

“Morocco is perceived as one of the most stable countries in the region and it proved to be so when protests started,” said Mohamed Abu Basha, an economist at Cairo-based EFG-Hermes Holding SAE, the biggest publicly traded Arab investment bank. “The king was quick to react with reform initiatives.”

The BIS report tracks fund flows from global banks to regional ones, including country-specific units of international banks from their parent companies, which they can use to lend domestically.

The amended constitution allows for the prime minister to be chosen from the party that wins elections even as the king retains the power to overrule or dissolve parliament, along with his role as “commander of the faithful” in the Islamic nation. Elections will be held Nov. 25, state-run Maghreb Arabe Presse news agency reported last week. The Group of Eight nations along with Persian Gulf countries pledged this month to help Egypt, Tunisia, Morocco and Jordan make the transition to democracy by mobilizing $38 billion of international financing.

The country retained its BBB- credit ratings from Standard & Poor’s and Fitch Ratings, the lowest investment grade in both scales, and the Ba1 by Moody’s Investors Service, the highest non-investment level. Egypt’s creditworthiness was cut twice by Moody’s this year to Ba3 and once by Fitch to BB due to political instability.

Morocco’s inflation rate was 2.2 percent in the first eight months of this year, according to central bank data, compared with 8.5 percent in Egypt. The central bank has held its benchmark interest rate at 3.25 percent since March 2009, when it was lowered by a quarter of a percentage point.

“Thanks to sound macroeconomic policy and political reforms, Morocco was well-equipped to respond to the social unrest,” the IMF said in a report in July. “In this challenging environment, Morocco has performed well economically and has seen its social indicators improve.”

The country of 33 million people, which was invited to join the six-member Gulf Cooperation Council, is investing in infrastructure projects including an allocation of 31.5 billion Moroccan dirhams ($3.83 billion) to expand wind-power capacity by 2020, high-speed rail to connect its main Atlantic coastal cities, and a seaport and logistics facility in Tangier. Morocco allocated 17 billion dirhams in this year’s budget to build and upgrade highways, railways and seaports.

“Foreign investors now prefer to invest in Morocco rather than Egypt or Tunisia,” said Alae Yahya, an analyst at Casablanca-based Sogecapital Bourse, a unit of Societe Generale SA. “Even compared to a country like South Africa, there is good investor confidence here. Of course there are structural and administrative problems but the government has undertaken initiatives to make things easier for international investors.”

Still, Morocco’s credit risk has risen to the highest level in more than two years as Europe’s sovereign-debt crisis and an economic slowdown in the U.S. threaten to stall the global economic recovery. The cost to insure the nation’s debt against non-payment for five years using credit default swaps jumped 65 basis points, or 0.65 percentage point, this quarter to 238 basis points yesterday, the highest level since June 2009, according to data provider CMA, which is owned by CME Group Inc. (CME) and compiles prices quoted by dealers in the privately negotiated market.

Morocco’s 10-year eurobond underperformed its counterparts in the region this quarter. The yield on the Moroccan notes rose 21 basis points since the end of June, compared with a 40 basis- point decline to 4.67 percent in the average yield for sovereign Middle Eastern debt, according to the HSBC/NASDAQ Dubai Middle East Conventional Sovereign US Dollar Bond Index.

The Moroccan economy is facing increased risk due to ties with its main trading partners in Europe, including France and Spain, Keren Uziyel, an economist at the London-based Economist Intelligence Unit, said in a Sept. 20 e-mail. The European Union is the North African nation’s largest trading partner, according to European Commission data.

International banks can be expected to continue to support projects in Morocco, Simon Kitchen, Cairo-based strategist at EFG-Hermes, said by telephone on Sept. 20. The capacity of local banks to finance such projects may be limited given a loan-to- deposit ratio of 80 percent in July, central bank data show.

“From a banker’s perspective, you’d be happier financing an investment rather than financing current spending because the investment should generate its own returns to pay you back,” Kitchen said.