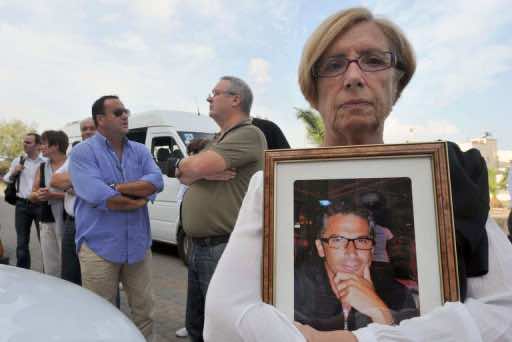 SALE, Morocco — The trial of nine suspects accused of a bomb attack that ripped through a Marrakesh cafe terrace packed with European tourists resumed on Thursday with bereaved relatives in attendance.

Seventeen people were killed and dozens wounded in the April 28 blast on Marrakesh’s bustling Djemaa El-Fna square for which main suspect Adil El-Atmani and his accomplices face the death penalty if found guilty.

The nine suspects are accused of “seriously undermining public order, premeditated murder and laying an ambush, the possession of and making of explosives, and belonging to a banned religious group.”

The victims, most of them tourists, included eight French nationals as well as citizens of Britain, Canada, Switzerland, Portugal and The Netherlands.

The Marrakesh bombing was the deadliest in the north African kingdom since attacks in the coastal city of Casablanca in 2003 which killed 33 people and 12 suicide bombers.

The trial opened on June 30 but was then adjourned to August 18 and further postponed to September 22 in order to allow the defendants to prepare their case.

Around 20 relatives of the victims were in Sale, just outside the capital Rabat, for the trial’s resumption on Thursday.

“They’ve been playing with us for four months, both the French and Moroccan judiciary,” said Nadine Asnar, the mother of a French victim.

“The French judiciary has forsaken us and it hasn’t even filed a civil lawsuit,” she complained.

For their part, the suspects’ relatives demanded the nine’s release.

“Free the innocents”, “Our relatives are innocent, the truth is elsewhere”, “All this is a masquerade”, read some of the placards they brought into the courtroom.

Security sources have alleged that Atmani, wearing a wig and carrying a guitar, left two bags containing bombs on the cafe terrace and triggered the blasts with a mobile phone just after leaving.

“Morocco wants this trial to wind up by the end of December, they want it to finish as quickly as possible because every time you talk about the attack, it doesn’t do any good to the tourism industry,” said Jacques Sombret, one of the French victims’ father.

He argued that the attack revealed major cracks in Morocco’s anti-terror surveillance system.

“When you see that Atmani left Morocco three times with a passport to go to Afghanistan or Libya and was sent back to his country three times … Moroccan police never saw fit to monitor him,” Sombret said.

During the August hearing, Atmani claimed he was innocent and asked for King Mohammed VI to intervene in his favour.

“Mr El-Atmani has not yet told me why he changed tack. As you know, after his arrest he admitted to the charges against him in front of investigators and the prosecutor,” his lawyer had told AFP earlier this week.

Police have described some of the suspects in the Marrakesh attack as “admirers of Al-Qaeda” and Moroccan authorities had initially blamed Al-Qaeda in the Islamic Maghreb (AQIM) for the bombing.

AQIM, behind a series of attacks and kidnappings in north Africa, denies responsibility.