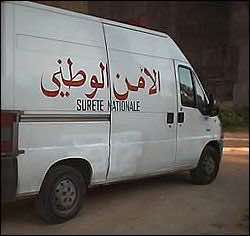 Joseph Braude is an American Jew, a convicted smuggler of Iraqi antiquities (in an attempt to call attention to the failure to secure the treasures from the National Museum of Iraq in the wake of the U.S.-led invasion to topple Saddam Hussein) and an author who was embedded for four months in Morocco’s security forces. That story is told in “The Honored Dead,” a true-crime account focusing primarily on a murder investigation in Casablanca. (The crime is “solved,” but the mystery of motive is never resolved.) The book is a brew of graphic violence (including a bloody murder, police brutality and homosexual rape) and sociological observation.

His book is anything but an unblemished account of Morocco. As he writes, “Moroccan courts – police precincts, too, for that matter – are underfunded, inadequately staffed, and generally overwhelmed by their caseloads.” But more than the crime story itself, Braude and the insights he gained during his adventure can provide valuable lessons for U.S. policymakers with regard to Morocco and the Middle East.

In the lobby of the Washington Hilton (yes, the one where President Ronald Reagan was shot), Braude tells me that he solicited many Arab countries for permission to embed himself with the security forces. “Only Morocco agreed — with no stipulations,” he says. He recognizes that this in and of itself says something about Morocco’s progress toward greater openness and accountability. He was given remarkable access within the police precinct and on patrols, and was permitted to conduct an independent investigation questioning the conclusions of the security service. He concedes that an “independent criminal investigation on Arab soil” was extraordinary. “It’s difficult to imagine a Syrian independent investigation in Damascus,” he remarks.

What he saw was a country in transition. He explains: “I witnessed violence [by the police] in the shantytowns. I also saw good policing.” He witnessed beatings of suspects as well as “first-rate policing” practiced by a security officer using sophisticated psychological techniques to obtain “a coaxed confession over coffee and cakes.”

There is, he suggests, a dilemma at the heart of policing not only in Morocco but throughout the Arab world. “The population craves dignity, closure and truth. But there are societal tensions that fall along sectarian lines. The police play a paternalistic role in refereeing these tensions.” In his crime case, that meant security forces concealed the motive of a murder in order to prevent an outpouring of anger by the city’s residents.

According to Braude, policing in Morocco is a “work in progress.” Just as Morocco’s King Mohammed VI is trying to peacefully transition from a monarchy with centralized power to a more democratic system with power diffused among different governmental entities and devolved to localities, policing is no longer entirely a traditional, autocratic security operation. But neither is it a full-blown modern system based on robust protection of individual rights. Inconsistencies are evident along generational lines. Older cops, in Braude’s experience, were more likely to resort to violence than younger officers, who are being trained in new forensic technology, psychological interrogation and respect for human rights. He says the question remains: “How does one work toward the rule of law while establishing security?”

That, of course, is the same problem facing Egyptians, Tunisians and other nationalities experiencing the Arab Spring. For the United States, the challenge is to develop collaborative relationships with new regimes that promote human rights and accountability and limit corruption without destabilizing civil societies that are still divided on religious, gender and ethnic lines. Braude suggests that even “little” things such as training in forensics and providing FBI-accredited instruction in counterterrorism “purely on the level of technical exchanges” are beneficial. However, Braude complains that not enough is being done in this regard in Morocco or elsewhere in the Arab world. Certainly, public embrace by the United States may be problematic for new regimes trying to obtain domestic legitimacy. However, “you talk to them and figure out what kind of programs” are most effective, he urges.

I asked him why Morocco has undergone a marked and peaceful political evolution while other nations are engulfed in violence. He sees it as a contrast between “fly-by-night military ‘republics’” and an ancient monarchy that enjoys widespread support and legitimacy. “The [Moroccan] dynasty is in the culture,” he explains. That said, he contends “a part is the king himself,” who has encouraged steady progress on constitutional reform and women’s rights.

Morocco remains a relatively poor country. Braude acknowledges that poverty takes its toll on the security apparatus. “You see them working 19 hours a day for low pay.” The lack of economic resources also creates a divergence between reality and legal theory. Morocco is supposed to follow the French system in which a suspect may be detained for 48 hours without benefit of a lawyer, but any findings must be submitted to a magistrate, who can then order a new investigation in which the suspect is entitled to legal representation. “In practice,” he asserts, “the police are inundated.” Given the caseload, there often is not a second, independent investigation. As a result, that initial investigation without benefit of counsel and conducted according to the whims of each investigative unit often becomes the basis for prosecution. He notes, “Poverty precludes the benefits of a better budgeted judiciary.”

In his view, Morocco is “moving in the right direction. The caveats are that the fundamentally well-intentioned initiatives have to be reinforced in an institution building.” That, he says, requires “vigilance by human rights groups” and the king to “make good on his promises.” In addition, “it has to do with the outside world,” he tells me. “When an Arab government does well it should be highlighted.” His book suggests that Morocco still has a ways to go. Nevertheless, he concludes, “they pay themselves a compliment by subjecting themselves to outside scrutiny.”

My takeaway from Braude is two-fold. First, throwing out oppressive despots is the easy part of the Arab Spring. Where the United States can make a difference is in providing technical expertise and support for building institutions that are essential to societal change in the Middle East. And even more important, the United States must find a way to escape the “squeaky wheel gets the oil” (no pun intended) syndrome. While public applause by a U.S. president is not always beneficial, the United States can certainly deploy carrots (trade, investment and diplomatic assistance) to those countries that show an interest in reform and utilize sticks (withholding the same) to those that don’t. But first, the United States must articulate a coherent vision and make clear our expectations for countries undergoing systemic change. That is something that the Obama administration has been unwilling or unable to do.