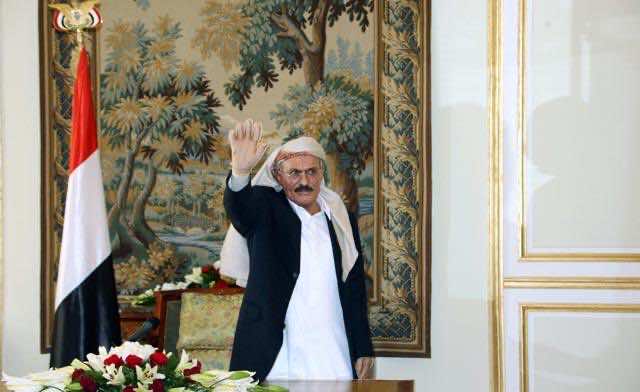 “Ali Abdullah Saleh, President of the Republic, returned this morning to the land of the nation safely after a trip for treatment in Riyadh that lasted more than three months,” an urgent news break on Yemen Television said.

Saleh has clung to power despite eight months of protests in which tens of thousands have taken to the streets to demand an end to his 33-year rule.

His return Friday came amid bloody escalation of violence between his pro- and anti-government forces in the capital Sanaa, bringing the death count from five days of violence to more than 100.

Protesters were due to return to the streets during Friday prayers, raising the risks of more confrontations between troops loyal to Saleh and activists demanding an end to his 33-year rule.

The United States, Saudi Arabia and other powers fear al-Qaeda’s Yemen wing could exploit the growing lawlessness in the country. Al-Qaeda militants have already seized cities in a Yemeni province just east of a key oil shipping channel in recent months.

Gun battles and shelling between state troops and soldiers backing the protest movement shook areas near “Change Square,” the name demonstrators have given the street where thousands have camped out for eight months.

Protesters, inspired by uprisings across the Arab world, marched into parts of the city controlled by pro-Saleh forces on Sunday and were met by heavy gunfire. The clashes escalated when troops loyal to army defector General Ali Mohsen joined in on the side of the protesters.

Overnight, one or two shells hit the southern end of the Change Square camp, killing at one person, a spokesman for the demonstrators said.

At least six people were killed as fighting raged on Thursday and Friday with heavy explosions and gunfire in Hasaba, a neighborhood of Sanaa where the powerful anti-Saleh tribal leader Sadeq al-Ahmar lives, residents said.

Snipers said to be lurking on the upper floors of buildings killed four protesters and wounded at least 14 around Change Square, a doctor at the square’s clinic said. Angry protesters set fire to a house where they believed snipers were hiding, while medics set up a blood donation campaign for the wounded.

A guard at the house of an opposition figure also died when Saleh loyalists bombarded his house.

The interior ministry said seven people were killed by late afternoon on Thursday, including two government soldiers and two armed tribesmen fighting alongside them.

Negotiations on a peaceful transfer of power have stalled, and the U.N.’s Yemen envoy said the country on the south end of the Arabian Peninsula would be torn apart unless a political solution is reached soon between Saleh’s camp and his foes.

“Unless there is a deal, or unless there a breakthrough to a political solution … the country will continue to fall apart and violence will spread to other parts of the country,” United Nations envoy Jamal bin Omar told Reuters.

“It’s very urgent that Yemenis make up their mind and agree on a reasonable way forward.”

Diplomats and analysts say the best chance of pulling the capital out of a descent into further violence is finalizing a deal for a transfer of power plan, which they say Yemeni politicians were just days away from finalizing when the fighting erupted.

Saleh has on three occasions backed out of a plan brokered by Gulf neighbors for him to step down. Yemenis eager to get on with their lives said they feared that negotiators did not have much time left before violence spiraled out of control.

“Today it’s fine, maybe tomorrow too,” said driver Mohammed, as he waited in a line of cars to pass a checkpoint. “They’ve got a few days, maybe a week to get some kind of political development. After that, I worry there will be a slaughter.”

A truce called by Yemen’s vice president earlier this week broke down in just a matter of hours, highlighting the need for a political breakthrough.

“There are some initiatives being discussed for a political solution under the supervision of Jamal bin Omar and we hope these efforts succeed. Their failure will push this country into more violence,” a high-ranking opposition official said.

Gulf Cooperation Council Secretary General Abdbullatif al-Zayani flew into Sanaa this week to try and resurrect the deal but left after two days with nothing to show for his efforts.

More than 400 have been killed since the grassroots revolt against repressive Saleh family rule began in January.