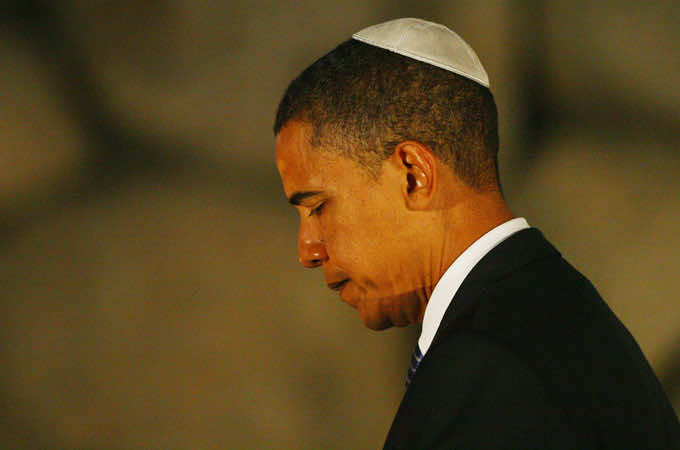 After the president’s speech to the UN, our senior analyst wonders why US leaders continue to pander to a foreign power.

Obama is the “the first Jewish President”. That’s the title of New York magazine’s lead article, written by John Heilemann and quoting a major Obama fundraiser.

Listening to Obama speak at the United Nations on Wednesday many would nod in agreement, not less in Palestine and the Arab world.

The US president has embraced the rejectionist Israeli position on the question of international recognition of an independent Palestinian state.

But that’s not a Jewish position. It’s a radical Zionist position. Many Jews, including US and Israeli Jews, do not embrace such extremist views.

But the fact that Obama surpassed his predecessor George W Bush, the most radical supporter of Israel among all US Presidents, has left everyone in Israel dumbstruck. The latest Zionist US president sounded like Israel’s own founding fathers.

Never have they heard a US president read straight from the papers of the Israeli government.

You would think after six decades of dispossession, four decades of occupation and two decades of peace processes that President Obama would recognise a political and moral discrepancy that needs fixing.

That he would underline, not undermine, his own words uttered in Cairo a year and a half ago about the need for Israel to stop its illegal settlements in Palestine.

That he would underline, not undermine his own projection – read promise – from the same podium last September of a Palestinian state within a year, meaning this week.

That he would underline, not undermine, his own rhetoric about freedom in the Arab region.

Or that he would underline, not undermine, his own opening emphasis about a peace based on withdrawal, not more of the same logic of war.

Alas, President Obama undermined his entire “change we can believe in” slogan.

His narrative is inspired by the worst of Israel’s official propaganda. Indeed, much of it is cut and pasted from their playbook.

He spoke of historical “facts” that have long been repudiated by Israeli historians, and of truths that are nothing more than one sided interpretations of a political situation.

Obama claimed that the Arabs launched wars against Israel. But, in actual fact, Israel is the aggressor, launching or instigating wars in: 1956, 1967, 1982, 2006 and 2008. Only the 1973 war was launched by Arabs, but only to recuperate occupied territories after the US and Israel rejected Anwar Sadat’s peace overtures.

He underlined the work of Israelis in forging a successful state in their “historic homeland”. But most of the world, and certainly the Arab world, saw Israel’s inception as a colonial project with theological pretexts.

Serbia also believes that Kosovo is the birth place of its nation; should they be allowed to forge a successful state of their own, an exclusively Serbian state in that territory?

Should each and every occupied people search from accommodation with their occupiers without interference from the international community? Is that how African and Middle Eastern nations gained their independence from European colonial powers?

Should a whole people go on living under occupation until their occupier is satisfied with the conditions for surrender?

Every other commentator in town would like to remind you not to expect much action from a US president on Israel during an election year.

As Heilemann illustrates in his article, Obama’s career was built on his relationships with generous Jewish contributors in Chicago.

Indeed, the guy who brought the most money to the Democratic party over the last several decades became Obama’s chief of staff, Rahm Emmanuel. Today, he’s the mayor of Chicago.

But it’s not only about money. It’s also about crucial support in Congress over urgent domestic issues that could make or break the Obama presidency. And the Israeli lobby, AIPAC, can make the president’s life miserable over the course of the next year.

Now, I understand all of that. But what I don’t understand is why it is accepted as a fait accompli! As the nature of politics! Take it or leave it!

If this is the case, then let’s at least call a spade a spade; and out the US administration(s) for being what so many seem to say it is: Not Jewish or Zionist, rather hypocritical.

It speaks of justice but pursues unfair policies; speaks of repression, but promotes its own interests at any cost. It preaches freedom but supports occupation; speaks of human rights but insists on entrusting the wolf, and only the wolf, with the hen house.

The joke is on everyone

Why should the Palestinians be held victims to US politics while being held hostage to Israeli politics for the last six decades. Why should most Israelis continue to live in a garrison state incapable of normalising relations with their neighbors?

Why should Americans watch as their politicians are held hostage to a foreign power and its influential supporters?

The pro-Israeli Jewish lobby, J Street, commented on the alarming pandering to Israel not only among Democrats but also Republicans, saying: “There’s no limit, it seems, to how far American politicians will go these days in pandering on Israel for political gain.”

While there has been strategic logic for the US support for Israel in the past, Washington’s current pandering makes little sense.

Washington has long used its influence with Israel as strategic leverage to reign in Arab leaders. Only Washington can restrain Israel in war and wring concessions in diplomacy, Arab leaders once reckoned.

But the dictators who either exploited Palestine to garner popular support at home, or bartered it in return for Western favours, belong to the past.

Today’s Arabs are bitter and angry at US-Israeli complicity in Palestine and they won’t be as easily bounded or bribed as their fallen dictatorships.

Marwan Bishara is Al Jazeera’s senior political analyst. He was previously a professor of International Relations at the American University of Paris. An author who writes extensively on global politics, he is widely regarded as a leading authority on the Middle East and international affairs.

The views expressed in this article are the author’s own and do not necessarily reflect Morocco World News editorial policy.