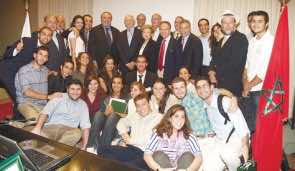 The world’s first colloquium in the Arab world for the study of the Holocaust took place this week, in large measure thanks to the groundwork laid by a program that seeks to educate American high school graduates about the history of cooperation between Jews and the other nations. The symposium, hosted by Al-Akhawayn University in Ifrane, Morocco and co-sponsored by the Israel gap-year program Kivunim, included three days of presentations and panels on the Nazi genocide, its repercussions for Morocco, and the historical relationships between Jews and Muslims in the Middle East.

The only Holocaust conference held in the Muslim world prior to this took place in Tehran, Iran in December 2006, and was widely denounced by Jewish leaders as an attempt not to gain a greater understand of those events, but to cast doubt on their ever having taken place. The groundbreaking Ifrane conference received the support of local Jewish community leaders and was attended by mainstream historians of the Holocaust, coexistence facilitators, government representatives – including the American Ambassador and emissaries of the Moroccan king – and ordinary Moroccan Muslims and Jews.

The conference was originally the idea of a group of Muslim students at Al-Akhawayn University in the Atlas Mountains, who formed a “Mimouna Club” — named for the post-Passover holiday of Jewish-Arab fraternity. The club shared their idea with students from the Kivunim program that they had met who were visiting the country to learn about Moroccan Jewish history. Kivunim Founding Director Peter Geffen, who accompanied the group, realized the historic importance of such an opportunity and agreed to help organize the event, bringing some of those same Kivunim students back to Morocco this week to attend the conference.

During World War Two, when Morocco was occupied by the French, who were in turn occupied by the Vichy regime that collaborated with the Nazis, Moroccan King Mohammed V is said to have protected the Jews living in his domain from suffering the fate that befell the Jews of Europe. On March 18, 2009, his grandson, the ruling monarch Mohammed VI, honored that tradition of inter-religious solidarity when he publicly proclaimed that he and the Moroccan people perceive the Shoah “as a wound to the collective memory, which we know is engraved in one of the most painful chapters in the collective history of mankind.”

While Muslims came to the conference to learn more about Jewish history, the Kivunim students were also there to learn about the history of Muslim-Jewish cooperation. Conference participant and 2009-10 Kivunim graduate Aaron Weinberg, whose parents are both Jewish educators in Chicago, was so moved by what he learned of Morocco’s Jews that he decided to make them a focus of his post-secondary education at Brandeis University. He says that the extraordinary alliances between the Moroccan Muslim and Jewish communities which existed prior to the emigration to Israel of most of the latter in the 1950s represents a positive model for Jewish-Gentile relations that should be taught in Jewish schools, alongside the history of the Holocaust.

“The Shoah was a tragedy unparalleled in the history of the Jewish people,” says Weinberg, but he is concerned that Holocaust horror stories might be eclipsing all other Jewish narratives. “How we teach our children about the Holocaust should be a centerpiece of Jewish education, but should not be the end-all and be-all,” he says. “Jewish history is not: ‘They wanted to kill us; we won; let’s eat!'” Weinberg says he is frightened by a trajectory of Jewish pedagogy that teaches fear of the other. “There are forces within our community that are trying to undermine those of us who are trying to build bridges between peoples,” he says.

The historic bridges between Jews and others have been part of Kivunim’s core curriculum since its beginnings in 2005-6. In addition to earning 30 academic credits from the Oxford University Center for Hebrew and Jewish Studies and experiencing the length and breadth of Israel, Kivunim participants travel to a dozen countries all told, as far afield as Germany and Spain, Greece and Turkey, Morocco and India. Geffen says that one of the purposes of the program is to not just teach students Diasporic Jewish history, but to make them comfortable with cultural differences and instill in them what he calls a ‘world consciousness’. He is convinced that despite the many anti-Semitic attacks that Jewish people have faced throughout history, it is precisely their ability to integrate and ingratiate themselves into host societies all over the world that should be esteemed.

“We have become terrified of others and we have created a gigantic and growing mythology about ourselves as victim, the others around us as enemy,” says Geffen. “I don’t see the world that way, I don’t think it’s healthy for anybody to see the world that way,” he says. Geffen believes that Kivunim fills an important niche for Jewish Generation Y-ers that are increasingly aware of the multi-cultural and multi-polar world around them, because “either they will be part of Jewish world that is narrow and suspicious and worried and victimized, or, they will have nothing to do with the Jewish world because they see it is all those things.” Geffen’s idea – that Jews who study their own culture in the context of their non-Jewish neighbors actually strengthen their own Jewish identities – may not be widespread among his peers. But as the founder of New York City’s Abraham Joshua Heschel School and with over 40 years of experience in the field of Jewish education, Geffen’s philosophy can’t be dismissed.

Kivunim is also unique among gap-year programs in its inclusion of the Arabic language in the syllabus. Geffen recruited Amal Najami Abu Sif, a Muslim woman from Haifa, to teach Arabic to Kivunim’s annual crop of 60 students and direct the entire academic program. For almost 15 years, Abu Sif has taught Hebrew to Arabs and Arabic to Jews. Although she says she knows of no other Arabs in Israel besides herself who do one and the other, Abu Sif is dedicated to both roads because, like Geffen, she firmly believes in Jewish-Arab coexistence. “I grew up playing with Orli and Etti, and Daddy’s friends were David and Amos, and everything was normal, Jews and Arabs. I spoke Hebrew, I grew up in a Jewish neighborhood,” says Abu Sif. “I didn’t know that there was any difference between Jews and Arabs.”

But the premise of peace education becomes tenuous when racial and religious tensions flare up in Israel. As a member of a minority, Abu Sif, 40, confesses it isn’t always easy living here. One of her neighbors informed her of a campaign to make the apartment building she lives in with her husband and three daughters ‘for Jews only’. She pulled one of those daughters out of a local Jewish school when she came home crying after a classmate told her “Death to Arabs!” But she trudges on, undeterred, like her name, Amal, which means ‘hope’ in Arabic. She believes that she is uniquely positioned to promote peace between Arabs and Jews in the Middle East, because she has the ear of those she believes will become the leaders of the American Jewish community in 15 or 20 years’ time. “There are people like us who want real peace and don’t treat Arabs as second-class citizens,” says Abu Sif. “It gives me the hope that it’s possible somehow.”

Geffen is preparing for that day, after real regional peace agreements are signed. If and when that time comes, he hopes Kivunim will have been the incubator for future Jewish Ambassadors to Arabia. “The Middle East only has two possibilities: it’s going to blow itself to bits – in a not-too-distant period – or it’s going to have peace,” says Geffen. “The question will then be, ‘Who is prepared to engage an open Arab world? Who is prepared to be the partner to an Arab Spring?'” Geffen asks. “That’s only going to be people who know a little Arabic, who are not afraid of the language, who know something about Islam and can therefore be respectful and appreciative, who have traveled into the Arab world and seen its beauty,” he says. “These are critical things for building a future.”