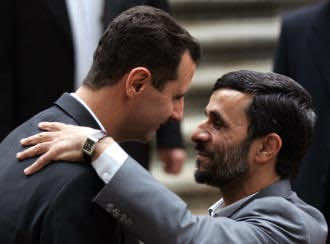 Syria’s violent crackdown on protesters has placed Hamas, Hezbollah and Iran in a tough spot as they try to reconcile their political ties to the Assad regime with their professed support for the Arab uprisings.

As President Bashar al-Assad’s regime faces growing isolation both domestically and on the world stage due to its six-month-long violent crackdown on opposition protesters, the increasingly real prospect of regime change in Syria has sent political tremors throughout the region.

The Assad regime claims the leadership mantle of the so-called resistance bloc in the Middle East (informal group including Syria, Hamas, Hezbollah and Iran – the ed.), a movement that opposes Israel and American influence in the region.

But the Syrian government’s violent crackdown, which has taken the lives of an estimated 2,700 people according to the UN, has begun to undermine the regime’s resistance credentials and could tarnish the reputation of its Islamist allies, threatening to permanently de-legitimize and weaken the current key players within the resistance camp.

“The whole raison d’être of the state is based on the whole slogan of resistance and we are facing Israel,” Khaled Hroub, an expert on Arab politics at the University of Cambridge, told Deutsche Welle.

“The rhetoric, the discourse is the backbone of the whole regime in the country, if you take this out nothing is left for the regime to promote itself, to justify its existence.”

But when the revolutionary fervor reached Syria, Nasrallah’s rhetoric came into conflict with his real political interest in the survival of the Assad regime, which acts as the crucial logistical link between Hezbollah and their Iranian backers.

“Had it not been for Syria being there to make sure that Hezbollah was armed and was supplied, then Hezbollah would have a lot of trouble maintaining its armed resistance as a whole, as an organization,” Rime Allaf, an expert on Syrian politics with the London-based think tank Chatham House, told Deutsche Welle.

Instead of clearly placing his support behind the demands of the Syrian demonstrators and risk damaging Hezbollah’s relationship with Damascus, Nasrallah urged the opposition to stand by the regime and give it time to implement reforms, which Allaf argues has undermined the organization’s popular support among the Syrian people.

“Hezbollah and Nasrallah for sure suffered greatly,” she said. “You saw scenes during this uprising which we never thought possible, where Syrian demonstrators were burning the flag of Hezbollah. This was unheard of.”

If the politics of the region shift definitively against the Assad regime and Hezbollah, an already volatile neighboring Lebanon could face renewed instability. Lebanon, once occupied by Syria, is currently governed by the Hezbollah-influenced March 8 Coalition.

“If the whole mood shifts, then Hezbollah would have more trouble, and if Hezbollah is not as strong as it is right now, then you would wonder about the whole political dynamics in Lebanon,” Allaf said.

Hamas, another spoke in the wheel of the resistance camp, has faced a difficult political balancing act during the uprising in Syria. Like Hezbollah, Hamas came out on the side of the revolutions in North Africa.

Hamas’ leadership, however, calls Damascus home. It is a mutually beneficial relationship that gives the Assad regime resistance credibility while providing Hamas leaders with relative safety compared to the unpredictable violence of the Gaza Strip.

“This is an Arab country (Syria) close enough to Palestine and Israel, holding the banner of so-called resistance, and of course giving the air and oxygen for Hamas to breath,” Hroub said. “So for Hamas, when Syria opened doors for them that was like a gift from heaven. They were facing impasses all over the place.”

But in August Syrian forces attacked a Palestinian refugee camp in the coastal city of Latakia, placing Hamas in a delicate political position as it straddles the line between maintaining relations with Damascus while avoiding damage to its legitimacy among its domestic constituencies in Palestine.

Although Iran still officially supports the Assad regime in order to preserve the integrity of its relationship with Hezbollah in Lebanon, the crackdowns in Syria during the Islamic holy month of Ramadan have pushed the political elite in Tehran to take a more critical look at its ally in Damascus.

“Iran is being a lot more pragmatic and a lot more farsighted than the Syrian regime itself by accepting that it may be inevitable that the regime would fall and trying to understand how its relationship with Hezbollah could continue to function after the demise of the Assad regime,” Allaf said.

As the crackdown continues now into its six month with no end in sight, the Syrian government’s violent course has created growing fissures in the region’s resistance bloc as its members seek to preserve both their interests as well as their images. Despite the emerging divisions, the Assad regime has shown no indication that it intends to compromise or re-evaluate its strategy.

“The regime itself is just blinded by its own madness of power and it’s just dragging itself down in this violence and it’s not seeing further anymore,” Allaf said.

“The Syrian regime seems to be convinced that the harder it hits the easier life it will have afterwards and the people will just go home. The exact opposite is happening, and they’re oblivious to that.”