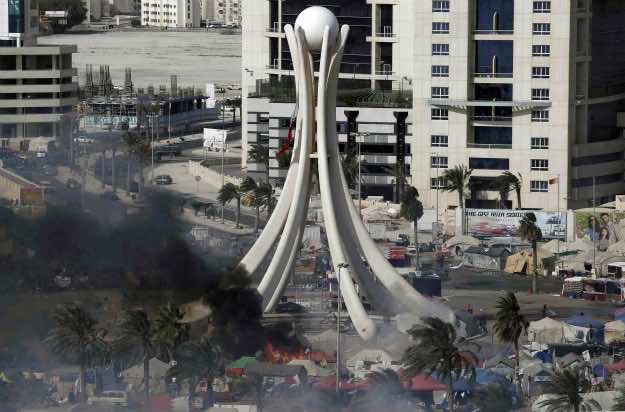 Welcome to the Arab revolt that failed.

MANAMA — As the U.N. General Assembly opens in New York, the world’s attention may be focused on the Israeli-Palestinian dispute — but tensions are still running high in a disputed strip of land further east. In the island kingdom of Bahrain, the struggle between Sunni and Shiite Muslims — and their respective patrons, Saudi Arabia and Iran — enters a new phase with the Sept. 24 by-elections to the country’s parliament.

Bahrain is where, in March, Saudi Arabia drew a proverbial line in the sand against the advance of the Arab Spring, leading a Saudi/United Arab Emirates coalition that sent 1,600 riot-trained paramilitary members and more than 20 tanks across the causeway that connects the two countries to put down a Shiite-led uprising. The crackdown led the Shiite opposition party al-Wefaq to resign its 18 seats in the 40-seat parliament in protest; the by-elections, scheduled by the ruling monarchy, are meant to fill those vacant seats. Al-Wefaq is boycotting the ballot but Shiite independent candidates are standing. Al-Wefaq’s local spiritual leader, Sheikh Issa Qassim, known by his Sunni detractors as “the ayatollah,” dubbed Bahrain “a fake democracy” in a fiery sermon on Friday, Sept. 23.

The elections threaten to upset the nervous stability that now reigns in the country. The Pearl Monument, which dominated a traffic circle around which demonstrators had gathered earlier this year, may have been demolished, but Shiite activists have promised to reoccupy the area this weekend. Such a coup will be a challenge — the junction is guarded by fleets of internal security vehicles, and down the road groups of Bahraini army Humvees also sit, waiting.

“Bahrain is going to boil this weekend,” read an email from a friend who lives in Manama. I don’t think he was referring to the weather, though noon temperatures are consistently over 100 degrees Fahrenheit. The U.S. Embassy in the Bahraini capital issued a similarly sober warning, urging Americans to stay away from “a potentially violent demonstration” near the Pearl Roundabout, now renamed al-Farooq Junction by the government, though known as Martyrs’ Square by the Shiite opposition.

Whether the demonstrations come to pass remains to be seen, but the outcome of the by-elections is clear. The government will see the new members — all the districts concerned are primarily Shiite-populated — as support for its cautious steps toward a more representative democracy. Filling the seats will enable the national assembly to function again, even though the government may be tempted to reduce the number of Shiites in it (voter absenteeism and ballot rigging could reduce Shiite members from 18 to 12). A revived political system will enable the government to implement modest political suggestions made during the course of the summer by a national dialogue, which discussed the background to the troubles of February and March.

Al-Wefaq and the hard-line Shiite party al-Haq (which has always seen political participation as a waste of time) will depict the result as a fig-leaf covering the open wound of a Sunni-ruled, majority-Shiite country, where, despite promises of reform, the al-Khalifa royal family has no intention of losing either its political or commercial grip.

So whether this battle takes place in the streets or at the ballot box, it comes down to rival narratives, and you can take your pick. In the latest media salvo, a New York Times front-page article on Sept. 16 included allegations that Shiite detainees had been forced to eat excrement — provoking a response by Bahrain’s ambassador in Washington, who complained the report “overlooks the successes we have been achieving in uniting a majority of Bahrainis.”

Perhaps surprisingly, some middle ground and cultural diversity has survived the political polarization. On Sept. 22, three winning candidates in four uncontested electoral districts spoke at a news conference. All Shiites, one was a turbaned cleric who could have been out of central casting for the part of an Iranian mullah. The second was a Moscow-trained engineer in a jacket and tie who runs a successful local contracting company. The third was a woman wearing a headscarf, though more loosely worn than the head coverings of many of the Sunni women at the event; she had formerly been a physical-fitness teacher.

Government officials would have been pleased that they were all on message about putting the country first, and because they had been pressured to one extent or another by people in the Shiite community not to stand, their story fit the government depiction of al-Wefaq as extremists. But the government might have been less happy that their comments revealed the island’s considerable tensions: The businessman, who started his remarks with the line, “In the name of Allah, I am an engineer,” spoke of the urgent need to tackle the problem of detained Shiites and those who had been fired for political activism.

However the by-elections play out, they will not alter the balance of power on the island. The national assembly is purely an advisory body — the new parliamentarians will only have a little influence and certainly no power. The major factor affecting the country’s future will continue to be its demographics. Bahrain’s census asks people to identify themselves as Jewish (of whom there are less than 40, including the kingdom’s envoy in Washington), Christian, Muslim, or “other.” But there is no subdivision between Sunni and Shiite Muslims.

The demographic breakdown between Shiite and Sunni Bahrainis is therefore a matter of bitter dispute. A more than usually loquacious government official, who was nevertheless reluctant to be quoted, conceded that the opposition “say[s] 70 [percent Shiite] and 30 [percent Sunni]. We say 50/50. The truth is somewhere in between.”

The preoccupation of Bahrain’s monarchy, therefore, has been to combat both international and domestic perceptions that it is just another minority regime in the Arab world clinging to power against the will of a hostile population. When King Hamad bin Isa al-Khalifa spoke at the United Nations on Sept. 22, the purpose — perhaps the only purpose — of his remarks was to show just enough willingness to reform to win continuing U.S. support for his government, the most obvious symbol of which is the base facility that houses the headquarters of the U.S. Navy’s 5th Fleet. The White House had to content itself with these words from the king: “We hereby reaffirm our support for the outcome of the [National] Dialogue.” Less helpful perhaps was the king’s dig at Tehran for its continuing to “occupy” three UAE islands.

Local newspapers showed the king sitting at the same lunch table as President Barack Obama. But the photo opportunity came at a cost. Although Obama affirmed that the United States is a “close friend of Bahrain,” he also said, “Steps have been taken toward reform and accountability, but more are required.”

Getting from discrimination to democracy will require harder decisions than the diplomatic platitudes or glib phrases crafted by top-flight public relations consultants. Iran was “not involved initially,” the loquacious government official admitted to me, but it “hasn’t missed an opportunity” to influence events since the troubles earlier this year. Aside from the individual Shiites who will participate electorally this weekend, the community remains largely disaffected. In a sign of how far the country has to go, the U.S. Embassy’s website includes maps showing areas that Americans should avoid; they show large chunks of the island — mainly groups of Shiite villages — as being out of bounds.

To succeed, King Hamad must show consistent leadership. For Bahrainis, who see his visage staring at them every day on posters on the roadsides and portraits in offices and government buildings, he is the leader. But to foreign diplomats, he more often seems vacillating. The king’s portrait usually appears alongside that of his uncle, Sheikh Khalifa bin Salman Al Khalifa, the world’s longest-serving prime minister, and the king’s son, Crown Prince Salman, a fountain of reform ideas who since March often appears to have been sidelined. Working out the relationships between the three is idle gossip for journalists and full-time employment for local diplomats.

The large Khalifa family and the intersecting relationships of Arab Gulf countries complicate matters further. King Hamad’s son Sheikh Khalid, a military officer who is married to a daughter of Saudi Arabia’s King Abdullah, is with the monarch in New York this week. Another son, Sheikh Nasser, is married to a daughter of the ruler of Dubai. It can be useful to have rich neighbors as in-laws, but it can also tie the monarchy’s hands when dealing with its domestic opposition. Neither Saudi Arabia nor Dubai is a role model for democracy, and they might only reinforce King Hamad’s sense of his right to rule.

When the king returns, the by-elections will be over. But after the polls close, the challenges of guiding Bahrain’s future in a turbulent region will remain.