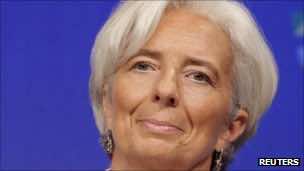 IMF chief Christine Lagarde has called for countries to “act now and act together” to keep on the path to economic recovery.

“We are by no means strangers, and we are linked by a common destiny,” she said at the annual meeting of the IMF and the World Bank in Washington.

“And these turbulent times must bind us ever closer together.”

Ms Lagarde was speaking after another week of volatility on the world’s share markets.

In Europe, the main share indexes in London, Paris and Frankfurt all fell about 4% over the week.

Speaking in Washington, where the G20 is also gathering, Mr Osborne said European leaders had six weeks to end the crisis.

Ms Lagarde said: “There is a path to recovery. It’s narrower than it was three years ago but there is a path and we have options.”

John Frary from Bedfordshire has seen his retirement fund fall by £7,000 in value in four weeks

But she added: “There are dark clouds over Europe and there is huge uncertainty in the US. And with that we could risk a collapse in global demand.

“Well, so what? Let’s remove the clouds and remove the uncertainty. Easier said than done, and it requires clearly a collective action.

“We are all in it together and nobody should be under any illusion that there could be a de-coupling.”

Global shares had slumped on Thursday, sparked by a Federal Reserve warning late the previous day about the outlook for the US economy.

And on Friday, Greece denied media reports it was contemplating defaulting on its debts, with creditors taking a 50% hit on Greek government bonds.

“All other discussions, rumours, comments and scenarios which are diverting our attention from this central target and Greece’s political obligation… do not help our common European task,” he said.

Also on Friday, credit rating agency Moody’s downgraded eight Greek banks due to concerns about Greece’s ability to pay back its debts.

Two of the Greek banks downgraded, the Emporiki Bank of Greece and General Bank of Greece, are majority-owned by France’s Credit Agricole and Societe Generale respectively.

Thursday’s market falls had sparked the G20 to announce a commitment “to take all necessary actions to preserve the stability of banking systems and financial markets as required”.

It said it would follow up this pledge with a “bold action plan” at the beginning of November.

Analysts said investors were unimpressed by the announcement.

“The statement from the G20 last night may have taken the edge off the current bitter market sentiment, but the reassurances from the finance ministers lack substance,” said Jane Foley at Rabobank.

The G20 has given little hint of what action it may take, but markets have long been calling for a substantial increase in the eurozone’s communal bailout fund, the European Financial Stability Facility (EFSF), from its agreed level of 440bn euros ($596bn; £385bn).

Many investors also want the eurozone to issue bonds guaranteed by every one of the 17-member nations – so-called eurobonds. However, a number of policymakers, particularly those in Germany, have resisted the idea.

In July, European finance ministers proposed making the EFSF more flexible, allowing it to buy individual government bonds – which would bring down the cost of borrowing for heavily indebted nations – and to offer emergency credit lines to banks. However, the proposals have not yet been ratified.

“Markets work on a second-by-second basis, while politicians seem to be working to a monthly calendar,” Jeremy Stretch from CIBC told the BBC.

UK Chancellor George Osborne also said that time was of the essence.

“There is a far greater sense of urgency than there was three weeks ago about the necessity for the eurozone to address its problems and there is pressure on the eurozone from across the international community,” he told the BBC.

The Labour leader, Ed Miliband, has called for the November meeting to be brought forward so that G20 countries can agree a plan for growth.

Jim O’Neill, chairman of Goldman Sachs Asset Management, suggested this weekend’s meeting in Washington could mark the beginning of concerted action to tackle the debt crisis in Europe which is the cause of so much stock market volatility.

“The thing that really brought the world to a better place in 2008 was genuine collective action involving both the developed and the developing world through the G20,” he told the BBC.

“The fact that they’re all there together in [Washington] DC this weekend should lay the framework for thoughts about quite significant actions… sometime between now or possibly at the November G20 in France.”