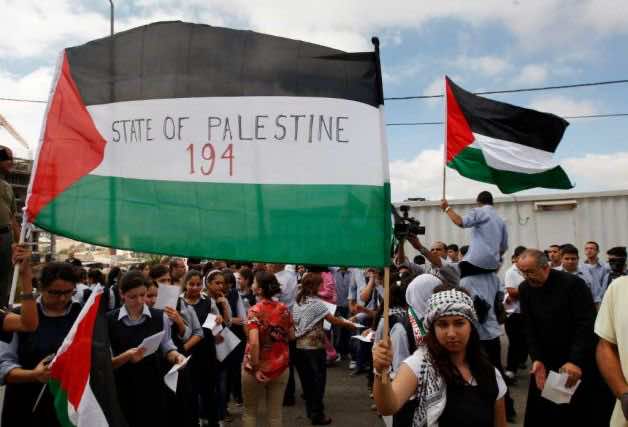 Those who urge the Palestinians to return to talks with Israel are in fact seeking to evade justice.

Forget our solemn promises nearly a century ago to give the Arabs independence in return for their help in World War I. Forget our pledge in 1922, when accepting the mandate from the League of Nations, to prepare the Palestinians for independence. Under the mandate Jews taking up residence in Palestine were supposed to have Palestinian citizenship. Aware of Arab concerns that the Balfour Declaration was being interpreted in an “exaggerated” way by Zionists and their sympathizers, the British government issued a White Paper that same year clarifying the position. “It is the intention of His Majesty’s government to foster the establishment of a full measure of self-government in Palestine. But… this should be accomplished by gradual stages…”

How gradual can you get?

The other day Britain’s Foreign Secretary William Hague, attending a United Nations gathering in aid of Libyan regime change, said of the Palestinian situation that the “only real way forward” was to go backwards to the negotiating table. “The consequences of failing to arrive at a two-state solution,” he said, “could be catastrophic for the Middle East and the wider world, so we have to keep trying… We want a secure Israel living alongside a viable Palestinian state.”

Note the old trick of emphasizing Israel’s security while planting the idea that Palestine must make do with a barely “viable” existence. You never hear these jokers talk about a secure Palestine and a viable Israel.

And having changed the law to provide a safe haven for Israelis wanted for war crimes, and to enable Tzipi-Dee-Doo-Dah Livni to do her shopping in Bond Street without fear of arrest, the Israel-firsters in Westminster – and they include 80 percent of Conservative MPs – are now panic-stricken to think that Palestinians, by going direct, might acquire sufficient UN status to take proceeding against their playmates in the International Criminal Court and demand UN peacekeepers kick them off their territory.

WHAT Hague wants to see at the UN is a return to lopsided negotiations to avoid this embarrassment, and he’s not saying which way Britain will vote. “Israelis and Palestinians committing themselves to return to negotiations, that is our objective. And that is why we and the 26 other European Union countries have withheld our positions on this.  We’re trying to use our leverage to persuade Israelis and Palestinians to do that.”

Any rational explanation for this endless insistence on more time-wasting negotiations, which are simply a cover for continued Israeli expansion and land-grabs, is carefully avoided.

Last week Alistair Burt, the Foreign Office minister in charge of Middle East affairs, was telling Parliament: “There is no alternative to negotiations and a solution cannot be imposed from outside…” But, as anyone with a grain of sense knows, there has to be intervention from outside. To heal this cancerous sore the international community must deliver law, justice and equality to the Holy Land. Fundamental human rights and the rule of law are not negotiable. Indeed those who advocate returning to the negotiating table before a level playing field has been established only seek to evade justice and jettison UN resolutions for ever.

Sir Gerald Kaufman, the veteran Jewish MP, said it was inconsistent to support self-determination for people in Libya, Tunisia, Egypt and Syria but not Palestine, whose people “have been waiting 64 years for UN decisions to be implanted.”

He said if the Palestinians seek statehood at the UN and fail, the Israelis will “regard this as a triumph” and end the peace process. Sir Gerald wanted to know, “Will this government stand up and put its hand up for the Palestinian people at the United Nations?”

Burt said the UK was working closely with other nations to ensure that “whatever comes out of the UN, it is in the spirit of both sides feeling that something has been gained and we have a situation which moves toward those negotiations which need to succeed.”

Sir Ming Campbell, a former Liberal Democrat leader, expressed “a profound sense of disappointment” with the government’s attitude, saying that Britain’s influence and reputation would be diminished by its stance. The UK could be accused of “double standards” with the prime minister and foreign secretary in Libya “doing everything to support self-determination.”

Burt and Hague are noted Israeli flag-wavers, as is Prime Minister David Cameron whose loyalty to the lawless entity, he has said, is “indestructible.” Should Palestinians brace themselves for further betrayal?

Even the opposition are singing the same old Zionist song. Douglas Alexander, shadow foreign secretary, in a letter to Hague, says:  “We (the Labour Party) want to see an immediate return to meaningful negotiations.” Were they ever meaningful?

However, he does remind Hague that the 2002 road map required the UN, EU, US and Russia to promote international recognition of a Palestinian state. But he’s soon back in harmony with the other stooges: “These negotiations are ultimately the only way that Palestinians are going to achieve the viable state they seek and that Israel will achieve the security that is their right…” Then he breaks ranks again to say: “Recognition at the United Nations for the Palestinians is one of the steps required to achieve this.”

But, like the others, he fails to acknowledge the Palestinians’ equal right to security. A viable state is all they’ll get. The word “viable”, meaning workable or capable of growing under the right conditions, is carefully chosen and repeatedly used because it has a distinctly second-rate ring to it. Then Alexander ad-libs once more: “It has never been the case that recognition can only follow the conclusion of negotiations.” And he finishes by saying: “The British government should be willing to support the recognition of Palestinian statehood as part of the continuing steps to achieve a comprehensive two- state solution.”

THEN we had Stephen O’Brien, minister for international development, saying: “It is clear that negotiations toward a two-state solution are the only way to meet the national aspirations of both Israelis and Palestinians and to achieve a sovereign, viable and contiguous Palestinian state living alongside Israel in peace and security.”

If he were asked what exactly Israel’s “national aspirations” are, how would he describe them?