New York - In the statement made by the Quartet following their meeting, held in New York on Friday, to discuss the prospects of the Middle East peace process, the representatives of the four parties reaffirmed their “statement of 20 May 2011, including its strong support for the vision of Israeli-Palestinian peace outlined by United States President Barack Obama”. 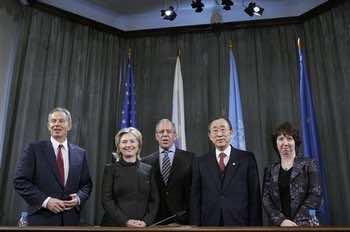 By
Adnane Bennis
-
Adnane Bennis is a national of Morocco, obtained his Bachelor’s Degree in Computer and Information Science from East west University in Chicago.
Sep 23, 2011
Spread the love

New York – In the statement made by the Quartet following their meeting, held in New York on Friday, to discuss the prospects of the Middle East peace process, the representatives of the four parties reaffirmed their “statement of 20 May 2011, including its strong support for the vision of Israeli-Palestinian peace outlined by United States President Barack Obama”.

The quartet representatives – U.N. Secretary General Ban Ki-moon, Russian Foreign Minister Sergei Lavrov, U.S. Secretary of State Hillary Rodham Clinton, and EU High Representative for Foreign Affairs and Security Policy of the European Union Catherine Ashton, in addition to the representative the of the Quartet Tony Blair – met to take note of the application of full UN membership submitted by president of the Palestinian authority Mahmoud Abass earlier in the day.

The Quartet reiterated its previous statements and declared its commitment to actively seek a comprehensive, just and permanent resolution for the Arab-Israeli conflict based on previous U.N resolutions, the Madrid Principles, the Roadmap and other agreements already achieved between the two parties.

It also appealed to the two parties to overcome the stalemate in talks and immediately start bilateral negotiations, proposing a number of steps to break the deadlock. These were outlined as:

Seemingly, the statement brought nothing notable. Reiteration of previous statements, reaffirmations of the importance of peace, appeals to resume negotiations, and encouragement for both sides to avoid confrontation and embrace a comprehensive solution do not meet the Palestinian aspirations for the right to have an independent State with East Jerusalem as its Capital. It also does not meet their demand for settlements activities to stop.

The Quartet, it seems, clings to the same adages regarding negotiations. They fell short of recognizing the basic rights of Palestinians to have their State. Surprisingly, the statement made no mention of the main cause of the failure of negotiations before, which is the continuation of Israeli settlements. They disappointingly refrain from calling on Israel to immediately stop its settlements, which are in contravention with international law.

The Quartet seems to be disconnected with world public opinion and gives the impression that they did not decipher the message conveyed by the Palestinian President Mahmoud Abbas during his speech. They gave more suggestions for more of the same types of negotiations that have been undermined by Israeli intransigence and persistence in constructing more settlements. The insistence to appeal for more negotiations “without delay and preconditions” cannot be underestimated for the Quartet; it seems as a never ending road that aims at concealing the main cause for the stalemate in this conflict: more and more settlements.

The total absence of mentioning the main cause of this deadlock can only mean one thing: an indestructible, unyielding support to Israel at the expense of peace, international legitimacy and Palestinian rights for a secure, sovereign and independent State.

As the unprecedented and historic crave for democracy, justice and dignity spreads through the Arab world, “the Palestinian Spring,” as Mahmoud Abass said, is on the horizon. The Arab Spring that was fueled by injustice, autocracy, oppression and inequality will rekindle the Palestinian quest for self-determination and justice as the great majority of Palestinians will receive this quartet statement as undermining their basic rights for sovereignty.

It seems like the Quartet felt obligated to come out with something, in light of Abbas’s speech and the Palestinian application, but the best it could do was a “watered-down” American version of a statement. It does not behoove anyone that the first step towards peace and genuine negotiations requires an end to any new settlements. Not simply a moratorium or freeze, but a discontinuation of Israel’s settlement policy. After all, what is the point of adding new homes for Israelis in East Jerusalem and the West Bank if these will likely have to be dismantled following a negotiated settlement that all sides claim to want.

And this is something that the Americans, and the Quartet throughout this week at the UN have not been able to say.

*Adnane Bennis is co-founder and managing editor of Morocco World News. You can follow him at Twitter: @BennisAdnane