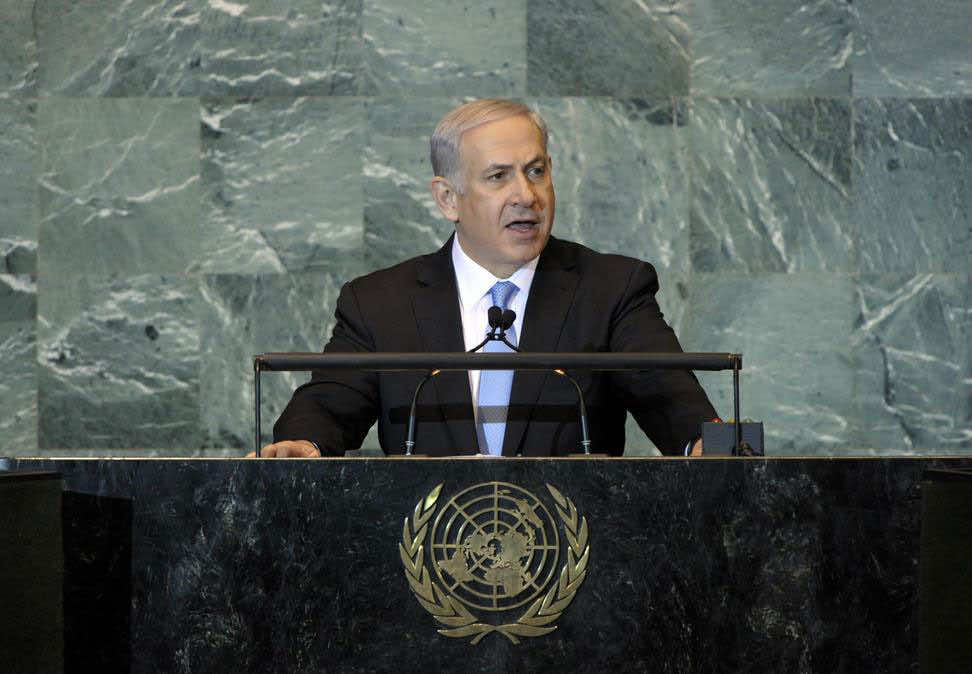 Lasting peace in the Middle East will only be achieved through direct negotiations between the Israelis and the Palestinians, and not through the imposition of United Nations resolutions, Israel’s Prime Minister Benjamin Netanyahu said on Friday.“The truth is that so far the Palestinians have refused to negotiate. The truth is that Israel wants peace with a Palestinian State, but the Palestinians want a State without peace,” Mr. Netanyahu told  the General Assembly’s annual general debate.He called on the Palestinians to accept Israel as a Jewish State, and said the core of the long-running Middle East conflict is not the dispute over Israeli settlements in the West Bank, “but the refusal of the Palestinians to recognize a Jewish State in any border.”Mr. Netanyahu spoke shortly after Mahmoud Abbas, the Palestinian Authority President, addressed the Assembly and after he handed over an application to Secretary-General  Ban Ki-moon for Palestine to become a UN Member State. Mr. Ban later submitted the application to the Security Council for consideration.

Mr. Netanyahu called on Mr. Abbas to “recognize the Jewish State, and make peace with us. In such a genuine peace, Israel is prepared to make painful compromises. We believe that the Palestinians should be neither the citizens of Israel nor its subjects. They should live in a free State of their own.

“But they should be ready, like us, for compromise. And we will know that they’re ready for compromise and for peace when they start taking Israel’s security requirements seriously and when they stop denying our historical connection to our ancient homeland.”

He offered to conduct direct negotiations with Mr. Abbas immediately in New York, where the General Assembly’s general debate is being held.

“President Abbas, why don’t you join me? We have to stop negotiating about the negotiations. Let’s just get on with it. Let’s negotiate peace.”

When a peace agreement is signed between the two sides, “Israel will not be the last country to welcome a Palestinian State as a new member of the United Nations. We will be the first.”

In his address Mr. Netanyahu also extended a “hand of peace” towards peoples across the Middle East and North Africa.