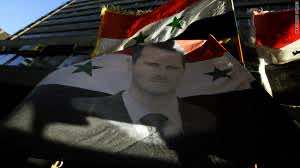 New sanctions against Syria come into effect on Saturday as Turkey says it has intercepted an arms shipment at sea destined for the protest-wracked country after another day of deadly demonstrations.

Both the European Union and Switzerland have targeted Syria’s oil sector in new sanctions that bite from Saturday, with the EU banning new investments there and also prohibiting the delivery of bank notes to Syria’s central bank.

The EU has also added two individuals and six companies to a list of people and entities facing an assets freeze and travel ban.

The new measures are the seventh set of EU sanctions imposed to punish the regime of President Bashar al-Assad for its relentless crackdown on dissent that erupted in mid March.

Earlier this month, the EU adopted a ban on Syrian crude oil imports. That is expected to hit hard, as the EU buys 95 percent of Syrian oil exports, providing a third of the regime’s hard currency earnings.

The Swiss sanctions put an embargo on the import, sale and transport of Syrian oil and oil products.

Turkey, formerly a key regional friend of Syria, has intercepted a shipload of weapons bound for Syria, the Anatolia news agency reported.

“Turkey has arrested a ship flying the Syrian flag and carrying weapons,” it quoted Prime Minister Recep Tayyip Erdogan as telling reporters in New York, where he attended the UN General Assembly.

Erdogan did not say when and where the ship was stopped.

The Turkish leader lashed out at Assad last week, telling him the era of oppressive dictators was past.

Erdogan said he had told Damascus arms shipments would be stopped, adding: “If in the future arms shipments are made by air or land, we will stop and seize them as we have done.”

On Tuesday, Erdogan said he had broken off dialogue with Damascus and warned of sanctions, after talks with US President Barack Obama in which the two discussed the need to “increase pressure” on Assad’s regime.

Friday — traditionally a day when anti-regime demonstrators take to the streets in Syria — saw the latest civilian deaths in the deadly crackdown on dissent, activists said.

The Britain-based Syrian Observatory for Human Rights said security forces had shot dead nine people in the Homs area in the centre of the country, while the Local Coordination Committees (LCC) group reported 12 killed nationwide.

The Observatory also said nearly 2,000 people had demonstrated in the eastern oil hub of Deir Ezzor, calling for Assad’s downfall.

More than 10,000 demonstrators also gathered in four locations in the predominantly Kurdish province of Hassakeh in the northeast, and protests were also reported in the southern Daraa region, a hub of anti-regime activity.

On Saturday, the Observatory reported nine arrests at Marqeb near the port of Banias, some of whom had been shot in the legs “while trying to flee.”

The office of the UN High Commissioner for Human Rights in Geneva has said the death toll from the crackdown on dissent since March 15 has risen to more than 2,700.

Damascus does not accept that popular opposition to the authorities exists, instead blaming “armed gangs” and “terrorists” for trying to sow chaos.

Amnesty International said on Friday it had uncovered evidence of the gruesome death of an 18-year-old girl in custody in Syria, and said it had compiled the names of more than 2,200 people reported killed during the unrest.

The London-based rights watchdog said the girl’s mutilated body was discovered in a Homs mortuary last week, two months after her arrest.

The family of Zainab al-Hosni discovered her body “by chance” and “in horrific circumstances,” while collecting the corpse of her activist elder brother Mohammad Deeb, it said in a statement.

He too had apparently been tortured and killed in detention. But his sister’s body had been decapitated and her arms and skin removed, the rights group said.

“We have documented other cases of protesters whose bodies were returned to their families in a mutilated state during recent months,” said Philip Luther, Amnesty’s deputy director for the Middle East and North Africa.

“But this is particularly shocking.”