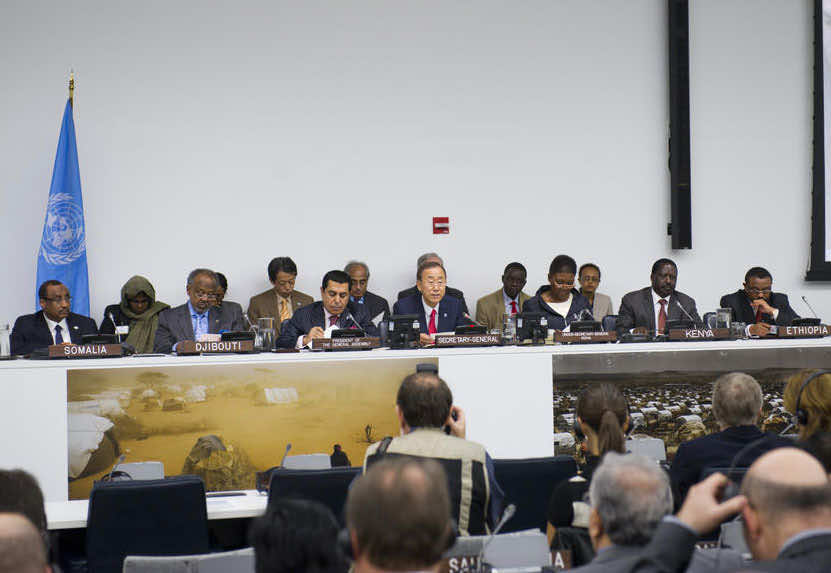 Secretary-General Ban Ki-moon today called for a long-term approach by national authorities and the international donor community to tackle the root causes of recurring drought-related food shortages in the Horn of Africa, which is facing the world’s worst humanitarian crisis.“Addressing underlying risk factors is among the keys to ensuring this crisis does not strike again,” Mr. Ban told a mini-summit in New York on the humanitarian emergency in Somalia, Kenya, Ethiopia and Djibouti, where an estimated 13 million people are facing severe food shortages as a result of the prolonged drought. Famine has so far been formally declared in six areas of Somalia.“Let us not allow drylands to remain investment deserts. Let us ensure that women and children have access to basic health care and water. Let us work for stability to allow markets to flourish,” said Mr. Ban at the mini summit convened on the margins of general debate of the 66th session of the General Assembly.He noted that successful programmes in Ethiopia and Kenya have helped ensure that, despite the worst drought in six decades, there is no famine. “This is a profound achievement that can be replicated some day in Somalia. We will see drought again – with increasing frequency. But drought need not become famine.”The United Nations and its partners are providing food, health care and other assistance to an estimated more than one million people and progress has been made in helping those most in need in Somalia, but more remains to be done, the Secretary-General said.

“We could save many more lives if we were given free access to areas under the control of Al-Shabaab [insurgents]. It is no coincidence that these are the districts where the crisis is most acute. Somalia will never be free of the threat of famine until it has peace and stability,” he said.

He thanked donors for their generous contributions, but noted that approximately $700 million was still required this year to continue the life-saving relief efforts in the region.

“National solidarity and international assistance has saved many lives. But we cannot afford to lose the momentum,” said Mr. Ban.

“As we scale up our response, we must also do more to coordinate our work. Many organizations are now operating in Somalia, and many countries and organizations have undertaken fund-raising and given generous bilateral donations. But we must avoid confusion and duplication.”

Speaking at the mini-summit, the President of the General Assembly Nassir Abdulaziz Al-Nasser pledged that the 66th session will come up with a draft resolution on strengthening humanitarian assistance in the Horn of Africa, which will be an opportunity for Member States to demonstrate their commitment to addressing the crisis.

He said one of his key priorities during the session will be improving disaster prevention and response.

“As the world’s pre-eminent forum for international peace and security, it is our collective responsibility to provide moral and financial support to these highly vulnerable populations,” said Mr. Al-Nasser. “The right to food, life and security are, after all, universal human rights.”

At a news conference to launch the Charter to End Extreme Hunger, which is backed by a coalition of aid agencies and civil society, Kenya’s Prime Minister Raila Odinga, the first senior government official from the region to support the initiative, said famine was an attack on the conscience of mankind.

“We should never allow people to starve, sometimes to death, because of famine which is preventable,” said Mr, Odinga. “I am hopeful that this charter, which I am aware will evolve over the next few weeks, will make a real difference.”

Welcoming the campaign to enlist support for the charter, Under-Secretary-General for Humanitarian Affairs Valerie Amos called for greater focus on hunger prevention.

“This famine, the drought across the Horn of Africa, has wrecked communities – it is having a major impact on the economic growth and the sustainability of countries in the Horn.”

Irish musician and anti-poverty activist Bob Geldof spoke of a “perfect storm of social challenges” that the world seems incapable of dealing with because of the speed with which they have come. He called for the universal adoption of the charter by all world leaders and international organizations.