September - An orange county jury on Friday found 10 Muslim students guilty of unlawfully disrupting a speech by the Israeli ambassador to the United States in February 2010 at the University of California, Irvine. 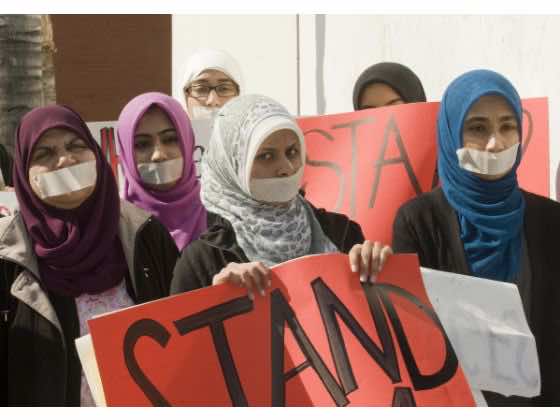 By
Adnane Bennis
-
Adnane Bennis is a national of Morocco, obtained his Bachelor’s Degree in Computer and Information Science from East west University in Chicago.
Sep 24, 2011
Spread the love

September – An orange county jury on Friday found 10 Muslim students guilty of unlawfully disrupting a speech by the Israeli ambassador to the United States in February 2010 at the University of California, Irvine.

The jury convicted the students of two misdemeanors of conspiring and disrupting the ambassador’s speech and standing up, one after the other, to shout prepared statements like “Michael Oren, propagating murder is not an expression of free speech!” and “It’s a shame this university has sponsored a mass murderer like yourself”.

The case has created intense debate over freedom of speech among Muslim, Christian, and civil rights activists who stressed that students were acting in accordance with their freedom of speech protected by the first amendment. They were expressing their views concerning the Gaza blockade.

This case will cast its shadow on the Muslim communities who already feel some inequity through the way mainstream media and the public look at and treat them. It can be an example of suppressing free speech and giving a pretext to others in similar situations to file lawsuits and silence any nascent opposite views.

Leaders of prominent Muslim organizations said they were appalled by the ruling and expressed their discontent and shock at the verdict.

“It’s a sad day for democracy when nonviolent protestors are criminalized by their government and are found guilty for exercising a constitutional right,” said Salam Al-Marayati, MPAC President in a statement on the organization’s website. “You can heckle the President, you can heckle high ranking government officials, but if you heckle an Israeli diplomat you will be prosecuted. These are Americans exercising their freedoms. This is a democracy not a dictatorship.”

“Justice was jaundiced in case of the UCI-11 students and America must worry for its democratic future,” said Shakeel Syed, Executive Director of the Islamic Shura Council of Southern California.

According to Associated Press, prosecutors said that in spite of calls to behave by campus officials, students broke the law by interrupting the speech on U.S Israeli relations. They disturbed the audience and infringed upon their right to hear the speech.

Attorneys defending the students argued that they have the right to protest. They went on to say that although their protest might have been discourteous, it was not unlawful. They said that they will appeal the convictions stating that their clients have already did community work and are all honor students who have the right to express themselves in such a way that is usually carried on in university campus.

The verdict was praised by the Shalom Elcott, President and CEO of the Rose Project of Jewish Federation & Family Services, Orange County, which sponsored the Oren’s speech. He described the verdict as a “landmark” in the history of the anti-Israel activity in U.S. universities.

This issue had been handled on university campus in 2010, when the UC Irvine disciplined the students and suspended the Muslim Student Union’s license for a quarter and put it on two years of probation.

An Arab American student who lives in New York expressed to Morocco World News his frustration over the ruling. “I wonder if the orange county jury would have acted the same way if an Arab diplomat was interrupted by Jewish students.” To some extent, I understand the reaction of anger of the organizers of the event, but I think that the ruling is disproportionate,” he added.

Full video can be seen at this link: The Irvine 11: young Muslims speaking the truth against Israeli ambassador/warcimes