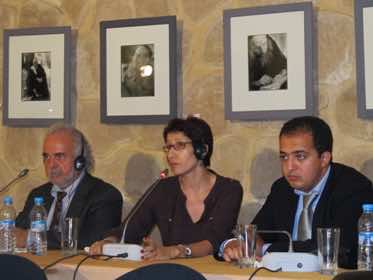 As a child, I vividly remember hearing a Holocaust survivor speak for the first time at the Minneapolis Jewish Day School where I attended elementary school.  I had seen the marks of an untold story on the arms of some of my friends’ grandparents, but it wasn’t until the fifth grade that I heard firsthand, one person’s nightmare narrative.  I grew up learning about the Holocaust as a primarily Jewish, Western tragedy, which, as a child, led me to personalize the catastrophe and miss the larger lesson.

This past week and over a decade later, I heard from another Holocaust survivor, Mrs. Elisabeth Citron, who spoke about her deportation to Auschwitz and the ensuing horrors of daily life in a Nazi concentration camp.  Both of these survivor narratives revealed to me the capacity of humans to inflict immense suffering on one another, and the importance of maintaining a collective memory of these horrific events in order to build tolerance.  However, the respective settings in which they were presented shaped the borders of their messages.

Mrs. Elisabeth Citron spoke at the, “Mohammad V: Righteous Among the Nations,” conference held in both Casablanca and Ifrane, Morocco.  The conference was the brainchild of Mehdi Boudra, a Moroccan-Muslim and the founder of Al Akhawayn University’s Mimouna club, which educates students, scholars, and the general public about Jewish-Moroccan history.

In Mr. Boudra’s words the club’s mission is “to show them [Moroccans] that Jew is not a synonym with Israel, and it [Judaism] is a part of our culture that we need to preserve.” Co-sponsered by the Museum of Moroccan Judaism, Al Akhawayn University, and Kivunim, the conference brought together a diverse audience and list of speakers, including holocaust survivors, Moroccan politicians, American students, Moroccan students, Palestinian-Israelis, Jewish-Israelis, international scholars, and dedicated peace-builders.

The conference highlighted a history of tolerance and goodwill towards the Jewish people, from  the under-taught story of King Mohammad V’s refusal to hand over the country’s Jewish population to the Vichy regime in German-occupied France, to King Mohammad VI’s 2009 description of the Holocaust as the “universal history of mankind.”  Ethan Buckner, Vassar College ’13, asserted in the discussion period that “The story of Mohammad V should be taught in U.S. public schools.  My holocaust education was very much framed in a narrative of victimization, and I was unaware of the courageous story of coexistence in Morocco.”

Key goals of the conference were to educate its participants about the importance of building cross-cultural understanding in order to prevent future tragedies and to create networks of peace-builders to address current issues of social justice. One of the speakers, Mr. Forsan Hussein, a Palestinian-Israeli CEO of the Jerusalem International YMCA, proudly stated, “I am a Muslim CEO of a Christian institution in a Jewish Country; It doesn’t get much better than this.” And he praised Mr. Boudra for putting together an event that enabled all participants to engage in, “knowing the other and yourself through a meaningful interaction with the other, because only then will you be able to have empathy.”

The Mimouna club is part of a growing movement of Moroccan-Muslim scholars seeking to study, teach, explore and preserve Moroccan-Jewish history through a variety of disciplines, while dispelling the conflation between Jews and Israelis.

Zhor Rhihel, the curator of Casablanca’s Museum of Moroccan Judaism and a leading Muslim expert on Hebrew and Jewish culture, said, “The Israeli-Palestinian conflict is far from Morocco, but many Moroccans don’t know any Jews in this country and their only images are of Jews killing Palestinian Children on television…The museum’s visitors are often confused between Israeli and Jew, but when they see the museum, it’s clear that it’s part of their culture… we need to preserve it for the Moroccan history.”

Surely, the conference provided a model for interfaith and cross-cultural dialogue, while demonstrating the role of Moroccans in honoring their traditions and preserving their diverse history.

*Samantha Stein graduated with an honors degree in Sociology and Anthropology from Lewis and Clark College in Portland, Oregon, and is currently based out of Rabat, Morocco.  Samantha has explored her passion for social justice issues, anthropology, and international development through work with projects ranging from building a human rights cultural center in Hay Mohammadi, Morocco to creating a digital archive of Moroccan-Jewish documents at the Museum of Moroccan Judaism.  Samantha’s research interests include national identity construction, ethnic conflict, and East-West relations. She is Morocco World News’ correspondent in Rabat.