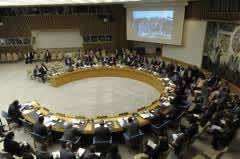 While the liberation of Libya from the oppressive regime of Moammar Qadhafi took place against the backdrop of the Arab spring, many in the Arab street are questioning the absence of any Arab official in the United Nations Support Mission in Libya (UNSMIL), which was authorized by the United Nations Security Council on 16 September. The three top officials in UNSMIL are all from Western countries.

Many, also, wonder why the Arab League, which should be at the forefront of regional organizations helping the Libyan people through the transition process, has seemingly no significant role to play in the country. Some observers believe that the Arab League is to blame for its absence in Libya, as some of its member states seem not ready, nor enthusiastic to be involved in Libya.

Some analysts acquainted with Libya, who spoke in condition of anonymity, told Morocco World News that for the United Nations to be able to discharge its duties in Libya, it is imperative that at least some of the officials that have been appointed by the Secretary General have knowledge of the modern history of the country, and sufficient information about the culture and its society.

They point out that the mission of the United Nations in Libya follows other United Nations Missions in other Arab countries (Sudan, Lebanon, Palestinian occupied territories) where most UN officials and “experts” are not from Arab countries and have little, if any, knowledge of the language, culture and societies of the countries where they are appointed.

In addition, other analysts have even questioned the necessity or added-value of a UN support mission to the country. “I almost felt bad for the Libyans when I heard the United Nations was sending a mission,” one analyst stated. The analyst pointed out that most of today’s successful democracies were able to transition and build democracies on their own.

He cited countries such as the United States, and Spain, noting that they experienced either revolutions, civil wars or transitioned from dictatorships (such as the Spanish in 1975) and built their democratic institutions through a process over time. The United States, for example, benefited during its revolutionary war with Great Britain from French intervention, but it was not necessary for the French to provide an advising role after the conflict.

“So far when it has come to organizing themselves, the Libyans seem to have been doing very well on their own,” he cited. These analysts point out that the movement began organically by Libyans, and that NTC leadership has been very conscientious in calling for “inclusiveness” and to avoid reprisal attacks.

Where many nation building exercises have been carried out by the UN in recent years, these missions seem to last indefinitely. In this sense, the analyst pointed out that in a case such as Libya, it could be better for its people to meet the challenges of building a democratic society on their own. Libya would likely experience “ups and downs” along the way, but this has been the process that all of today’s successful democracies have followed.

There is no reason that Libyans, especially in light of their actions demonstrated so far during the revolution, should not be able to do likewise. In fact, confronting these problems on their own might be the best way to ensure sustainability of the democratic society they are building and avoid dependency on the international community, claimed the analyst.

It should be noted, however, that Ian Martin, the head of the new mission, is one of the UN’s most skilled leaders in carrying-out such activities. Martin has repeatedly stressed that the mission will only be assisting the Libyans in areas where they have requested support. This fact still does not alleviate concerns that no Arabs are represented among the mission’s top leadership.