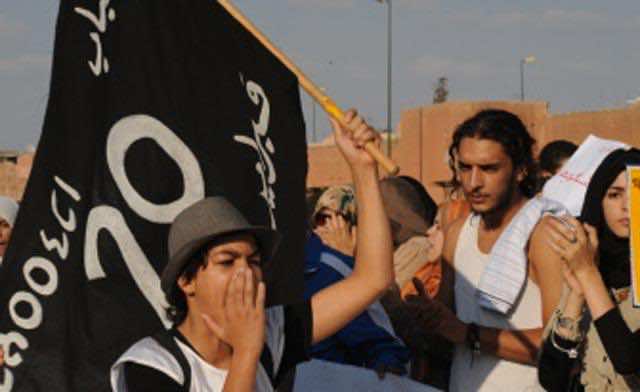 Thousands of Moroccans demonstrated against the government in the North African kingdom’s biggest city, threatening to boycott the upcoming elections.

The weekly demonstration by the pro-democracy February 20 movement on Sunday attracted around 10,000 people in Casablanca, making it the largest demonstration in months.

The march took place in the sprawling lower income neighborhood of Sbata, where in May pro-democracy demonstrators were attacked and beaten by police.

“Once we were beaten here, now we have returned,” chanted the exultant marchers, who were calling for greater freedoms and an end to government corruption.

Like much of the rest of the Middle East, Morocco was swept with popular protests calling for reform early in the year. But the king promised a constitutional reform and by late summer, the weekly demonstrations had evaporated.

A new reformist constitution was passed in July and parliamentary elections will be held in two months, but the February 20 movement has denounced both and restarted its demonstrations.

“Will you vote?” chanted a protest leader. “No!” roared back the demonstrators.

Though the movement, which includes leftists, youth activists and Islamists, has not officially made a decision about participating in elections, individual chapters have already called for a boycott.

In the capital Rabat, about 2,000 people marched from the lower income neighborhood of Akkari to downtown and the parliament. They did not, however, call for boycotting the elections.

A main theme of the demonstrations, which take place to some degree in most Moroccan cities, are the poor social services in the country, such as health and education, as well as government corruption and nepotism.