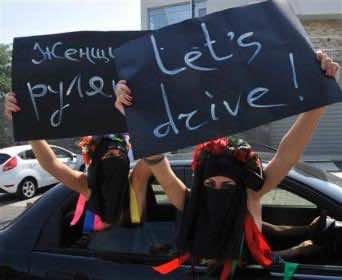 Saudi Arabia’s appointed parliament has yielded to persistent local female demands to debate their bid to end a long-standing ban on driving cars by women and the discussion could end up in a positive decision.

But any agreement by the Shura council to let women drive will have to be endorsed by king Abdullah bin Abdul Aziz, who has maintained silence towards a recent campaign by Saudi women to defy the ban and drive cars in public. The campaign has resulted in the detention of several women caught driving.

Shura has received hundreds of letters from women asking it to discuss the issue and the council will soon conduct a “deep and comprehensive” study on the matter, said Mashaal Mamdouh, head of the human rights panel in Shura.

“The discussions could result in allowing women to drive cars but a final decision has to be endorsed by the Monarch…the council will seriously debate this issue after most members refused even to consider it in the past,” he said, quoted by the London-based Saudi Arabic language daily ‘Al Hayat’.

Mamdouh said there is no official ban on women’s driving and that those who are opposed to it do not belong to the “fundamentalist camp.”

“Those who strongly object to women’s driving are mostly tribal people who stick to long-standing traditions and habits…as for supporters, they are divided into two camps—those who are not interested and those who strongly support it.”

Mamdouh said women believe their demands to end the unofficial ban on driving are legitimate, adding that Shura would allow some women and a lawyer representing them to attend its debates on that issue.

“Once the issue is debated, we will present a recommendation to the Monarch…the Shura decision is not an executive move because it must be followed by a final decision by the Monarch,” he said.

“Shura could take a positive decision but a refusal remains a possibility…we hope that the country’s Mufti (top Islamic scholar) and the other members of the supreme scholars authority will present their views on this issue.…we will comply with what they say because they know better than us in this regard.”

“Not a single letter supported the idea of driving cars by women….but as far as we are concerned, there are no red lines for us to debate this issue.”Many defiant Saudi women were reported to have been arrested over the past few weeks after they were caught driving. The move was part of a campaign launched by thousands of women on Facebook on June 17 to press for an end to the unofficial ban on female driving in the conservative Gulf kingdom, which controls over a fifth of the world’s proven oil wealth.The drive was followed by a counter- campaign by over 1,000 Saudi women to press for keeping the driving ban, saying those who are pressing for lifting the ban are a “weird” minority.

Newspapers in July published a text of the statement, which said any move by the government to lift the ban would hurt the Islamic religion and destabilise the country.