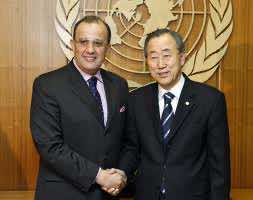 Morocco reiterated, on Monday at the UN headquarters in New York, “its full commitment to continue and intensify the negotiating process to reach a mutually acceptable political solution to the regional dispute over the Moroccan Sahara, based on the Moroccan autonomy initiative”.

The autonomy initiative was “described as serious and credible by the Security Council through six successive resolutions,” Moroccan Foreign Minister Taib Fassi Fihri told the member states during the general debate of the 66th session of the UN General Assembly.

This “bold and realistic initiative abides by the international legality, within the framework of the Kingdom’s national unity and territorial sovereignty, away from unilateral restrictive interpretations that only establish the status quo,” Fassi Fihri said.

“Each party must assume its responsibilities, particularly in light of the events under way in the region, in order to seek seriously and in good faith to reach a political consensual, lasting solution to this regional dispute.”

The minister voiced conviction that the reforms “undertaken by the Maghreb countries are likely to give new momentum to the Maghreb integration, in accordance with the aspirations of the five peoples of the region.

In this context, Morocco, which endeavoured to revitalize its bilateral relations with Algeria through ministerial visits, wishes that these visits will pave the way for full normalisation of relations between the two countries, including the reopening of land borders, in accordance with the principle of good neighborliness, Fassi Fihri said.