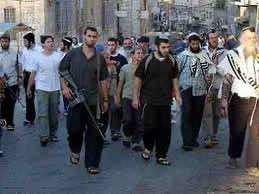 Two weeks ago, an announcement appeared on a French website, calling for “militants with military experience” to participate in a solidarity trip to Israel between Sep. 19 and 25.

“The aim of this expedition is to lend a hand to our brothers facing aggression from the Palestinian occupiers, and to enhance the security of Jewish towns in Judea and Samaria,” it explained. The dates of the trip coincide with the Palestinian statehood bid at the United Nations.

As of Sep. 23, in response to this call, there were 55 French citizens, both men and women, with military experience, stationed inside the illegal Israeli settlements up and down the West Bank. Organised into five separate groups of 11, their mandate is to “defend the settlements against any attack from Palestinians”, and to “aid” in areas where they feel there is a lack of Israeli army personnel or police forces.

The website belongs to the French chapter of the Jewish Defence League (JDL), a far-right Jewish group founded by Rabbi Meir Kahane in the United States in 1968. The Federal Bureau of Investigation has referred to the JDL as a “violent extremist organisation”.

“In France, it is a movement made up of French citizens who defend the Jewish community when faced with aggression, and also defends Israel in a more general manner,” said Amnon Cohen, a spokesperson for the group. “In terms of ideology, we are Zionists, pro-Israeli, and we share similar ideologies to that of the Ichud Leumi [“National Union”] party in Israel.”

The National Union advocates the settlement of Jewish people in the entirety of the occupied West Bank, which it calls by its biblical name of Judea and Samaria.

“People say we are extreme because we believe in Judea and Samaria, and that this belongs to the Israelis, the Jews, but I don’t consider this to be extreme,” Cohen told Al Jazeera.

He was quick to point out that the JDL, contrary to recent media reports, is not banned in Israel or the U.S., but in fact, has active chapters across the world, including the U.S., Canada, the UK and France.

“We are active, the authorities are aware of us, and we maintain good relations with them,” he said.

Numerous examples of targeted attacks on pro-Palestinian entities, movements and demonstrations across France by individuals associating with the JDL validate Cohen’s statements.

Nicolas Shahshahani, manager of La Librarie Resistances, a bookstore located in a quiet neighbourhood of Paris, has been the victim of such aggression. The first attack occurred in December 2006 soon after the store’s opening, when Shahshahani asked two Jewish authors, the late Tanya Reinhart and Aharon Shabtai to speak, both critics of Israeli policy in the occupied territories.

Midway through the event, the bookstore was suddenly filled with tear gas, as a group of six masked people wearing helmets, and armed with iron bars entered and raided the store, shouting obscenities at the attendees.

“They broke the windows, and I had to go to the hospital to get treatment for the teargas,” Shahshahani told Al Jazeera. “We launched a complaint against the police, but of course there was no investigation.”

In July 2009 the bookstore was targeted once again. Five people, who identified themselves as members of the JDL, poured litres of cooking oil all over the store and its books. “This is just as efficient as fire, if not more, if you want to damage a bookshop,” explained Shahshahani.

That time, however, the perpetrators were taken to court, where they admitted guilt, and were given suspended prison terms plus made to pay civil damages.

In another case, about 20 JDL members assaulted four students from Nanterre University. The attack, in which one student had his facial bones broken, took place within the compounds of the Administrative Court of Paris. Only Anthony Attal, reputed to be head of the group at the time, was charged.

The spokesperson for the Nanterre student association, AGEN, who wished to remain anonymous for fear of reprisal attacks, was present when the beating took place. Forced to do their own investigation into the matter, the students presented the police with their evidence.

“We had video footage that identified Attal as the perpetrator,” he said, adding that as an association, AGEN – a Palestinian solidarity organisation – was regularly targeted by the JDL.

“When you spend many years attending these demonstrations, you start to recognise the faces of those who turn up and commit acts of aggression and intimidation, and then you see the same faces in court. It’s not difficult to point out who belongs to the JDL,” he said.

The court process to convict Attal was unusual, according to Dominique Cochain, the lawyer representing one of the victims.

“The aggressor wasn’t present in the court, neither was his lawyer, and the judge therefore took it upon himself to interrogate the victim for two hours, trying to make the victim say it was a fight rather than an act of aggression,” essentially playing the role of the defence lawyer, she told Al Jazeera.

Since his conviction, Attal has been captured on video at several pro- Palestinian demonstrations, as recently as this summer.

“It gives the signal to others that there is a possibility to continue with this type of aggression, because it is not dealt with harshly,” said Cochain. “In my opinion, there is a certain level of tolerance between the French authorities and this group.” Cochain, who has been defending victims of these aggressions since 2004, has also been a victim of intimidation. “I’ve been verbally abused and menaced because of the cases I do,” she said. “They’ve called me the ‘devil lawyer’ and taken my photo,” adding that she can identify them by the JDL logos they flash at her.

Cohen, however, says any association between the attacks and the JDL are false. “These people say whatever they want against us, but it doesn’t mean it’s us doing it,” he said.

Trying to connect members officially to the group is difficult to prove, due to the way organisations are structured in France. Registration would force the group to put out a manifesto and officially name members of its board.

However, as registration is not obligatory, the JDL can exist without being registered, whereby membership is neither official nor public.

Some people claim that the police purposefully ignore unlawful acts of aggression purportedly carried out by the JDL. While Cohen denies this, he admits to having good relations with the authorities.

“Our adversaries say we work hand in hand with them, but we don’t,” he said. “We just divide the work. For example, if there is a protest we are involved in, the police secure the streets, and we secure the entrances.”

“The police know that we are there to protect the community,” he added.

French authorities referred Al Jazeera to the Ministry of Interior, who did not respond to an interview request.

The JDL encourages its members to undertake training in Krav Maga [Hebrew: “hand to hand combat”], a form of martial art used by the Israeli forces for close combat in urban warfare.

“We give this training to our members, so they are capable of defending themselves,” Cohen explained.

Military training is also encouraged for its members. “I tell the members that they should do military service, and we encourage this,” said Cohen, adding that some JDL members have been enrolled in the French army.

But AGEN says each of its demonstrations have been targeted by the JDL. “They hear about pro-Palestinian demonstrations, such as the Gaza flotilla solidarity events we had this summer, and they show up and start abusing people. It’s not self-defence when they actively search for the demonstration,” he said. “They hide in the streets when demonstrations happen, and attack the tail-end of the protests.”

“We’ve asked for the dissolution of the JDL through a petition signed by 30 different associations, as they are an armed militia, which is forbidden in France,” he said, but the petition has yet to gain traction with French authorities.

Ironically, prominent Jewish lobbies in France dissociate with the JDL, claiming they are groups of violent youth who do not represent the Jewish community.

Richard Prasquier, president of the Conseil Representatif des Institutions juives de France (CRIF), France’s main Jewish lobby group, told Al Jazeera: “There are no relations between CRIF and the JDL, and I don’t want anything to do with them.”

Others remain unconvinced. “For years there have been calls for the government to dissolve the JDL, but they have done nothing because of CRIF,” said Shahshahani. “On the street, when CRIF holds a public event, it’s the JDL that provides the security in coordination with the French police.”

Cohen confirmed what Shahshahani had said, adding: “Officially CRIF says they are separate from us, but there is the official position, and then there is reality. When there is something going on, they call us.”

Sammy Ghozlan, a former police officer and president of the Bureau Nationnal de Vigilance Contre le Anti-semitisme (BNVCA), told Al Jazeera that they too “have no particular relationship with the JDL”, although he was more understanding to the motives behind such actions.

“While the JDL are an extremist group, and not very well tolerated, their actions are a result of the discontent that exists, and this is continuing to grow,” said Ghozlan. “Furthermore, the violence from the pro-Palestinian side is increasing, and the Jewish people are in despair.”

Referring to the current “mission” to Israel and the West Bank, the call for solidarity is being taken very seriously by the JDL. Cohen refused to give any personal details of his comrades in the settlements, as “it is not a show, but a serious gesture of solidarity. This is a serious trip; we’ve sent over people who are slightly older, with more experience, between the ages of 24 and 35”, including three women.

“We know the IDF doesn’t need us, but we’re going to show our solidarity. We’re going over to make sure all areas are covered, and to defend the settlements,” he said.

Pro-Palestinian activists such as Shahshahani say the call should be taken seriously.