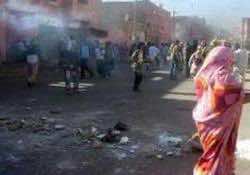 Seven people were killed in a violent incident right after the end of a foot-ball game between Chabab Al-Mohammadia and local Mouloudia from  the city of Dakhla in the Sahara.

Among those killed there were two policemen. Three people also died after being run over by four-wheel vehicles driven by people with criminal records, according to a statement carried by the Maghreb Press news agency.

The incident resulted also in damage to many local businesses and vehicles.

The clashes started when fans from both teams started attacking each other with stones, before they degenerated into deadly confrontations.

The local authorities have immediately opened an investigation into the causes of the confrontations and the instigators.

The incident in the Saharan city was somewhat reminiscent to clashes with police last year in November in the contested region.  On Monday 8 November 2010, a confrontation broke out with police in the city of Layoune when local authorities moved to dismantle an illegal camp of about 12,000 people (20,000 according to the Polisario and Spanish Media) who had been protesting the deterioration of their living conditions and the lack of housing.

The event, which resulted in the death of 11 law enforcement officers and 159 wounded, in addition to 2 civilian deaths among the protesters, was used by the Polisario front and its acolytes (especially Spanish media) to point out the “abuses of human rights” perpetrated by Morocco’s authorities against the Saharawi population. The Polisario claimd that the Layoune incidents resulted in the death of 36 Sahrawis, while 723 were wounded.

Later on, the reports released by Human Rights Watch and Amnesty International confirmed the death toll among Moroccan law enforcement official, as it was announced by the Moroccan government and concluded that  the numbers put forth by the Polisario and its acolytes were unfounded.

The Sahara in perspective

Since Spain took over the Sahara in 1884 Morocco had always fought for the reintegration of this territory to Moroccan sovereignty. Although Spain occupied the Sahara in 1884, it was not until 1934 that is started exercising its de facto control over the territory. Throughout this period, Moroccans never gave up their desire to expel the Spaniards from the Sahara.

After the independence of Morocco in 1956 and until 1975, Rabat had always laid claim over its sovereignty over the Sahara and raised this question at the Decolonization Committee of the United Nations (Fourth Committee). Throughout this period and until 1973, the international community had never heard of the Polisario. It is not until that year the Polisario started claiming to be the representative of the Sahrawi people and demanding the independence of the Sahara.

After the withdrawal of Spain from the territory and subsequent signature of the Madrid accord of November 14, 1975, Morocco and the Polisario had been waging  a war over the sovereignty over the Sahara. Confrontations between the two sides lasted until 1991 when the United Nations brokered a ceasefire that took effect in September 1991.

Ever since, the United Nations has been trying to help the two parties (Morocco and the Polisario) to reach a mutually acceptable solution for the conflict to no avail, due to their seemingly irreconcilable position.

In April 2007, Morocco submitted to the Security Council an Autonomy Plan that provides for wide-ranging autonomy for the Sahara, with a local government and a parliament, within the Moroccan sovereignty. The Moroccan initiative was considered by members of the Security Council as a “credible” and “serious” option that may lead to the settlement of the conflict. The Polisario  Front, supported by Algeria and South Africa, rejected this proposal outright, on the ground that it does not provide for the option of independence of the Sahara from Morocco. The Polisario clings to its position of the organization of referendum with the independence as an option.

Over the past decade, many observers have stated that an independent Saharawi State cannot be envisaged as a “realistic option”. This was the message conveyed by the spokesman of the U.S. Department of State on April 30th 2008 before the UN Security Council, on the occasion of the vote of resolution S/RES/1813.

Similarly, in an interview given to the Spanish newspaper El Pais, the former Special Representative of the UN Secretary General for the Sahara, Peter Walsum, stated that the establishment of a Sahrawi State is not an “accessible objective”. Back in 2000, in his report to the Security Council on the Situation in the Sahara (S/2000/461) Kofi Annan, then Secretary General of the United Nations, stated that it was essential that the parties be “prepared to consider other ways of achieving an early, durable and agreed resolution over their dispute over the Sahara.

Over the past two years Morocco and the Polisario have been holding informal talks under the auspices of the United nations Secretary General’s Personal Envoy, Mr. Christopher Ross, in order to break the deadlock and achieve progress towards the settlement of the dispute. These talks have so far not yielded any progress. The eight informal rounds of talks were held last July.