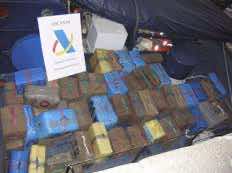 The operation was carried out when the two men were about to sail from the waters of Oued Laou (near the city of Tetouan in Northern Morocco) to Europe with one ton of cannabis resin stashed inside their yacht.

The two men, aged 50 and 33, were arrested by a patrol of Moroccan Royal Marines in charge of combating illegal emigration and international drug trafficking.

Ketama, in the Rif region, is the biggest area of cannabis production in Morocco. Since the early 1990s, Morocco has been making greater efforts and devoting significant resources to stop the spread of cannabis cultivation to other regions contiguous to Ketama.

Morocco authorities have also used helicopters to drop pesticides on plantations in the region to burn the fields.

Over the past decade, Morocco has pursued a strategy aimed not only at burning fields or stopping the cultivation of cannabis, but also at helping farmers to grow alternative crops.

According to Moroccan journalist Ayda Alami, since 2003 Morocco has received €28 million ($38 million) from the European Union to eradicate the cultivation of cannabis and has signed several treaties pledging to do so. In addition, the United States donated $43 million to help farmers plant new crops instead of hashish.

The Rif region, where cannabis is cultivated, is one of the poorest regions of the country.

In addition to its extremely difficult climatic conditions, it has been neglected by the Moroccan government for four decades since the independence of the country in 1956.

With the accession of King Mohamed VI to the throne in 1999, the government has been much more committed to develop this region and make it more attractive to investors in order to create more job opportunities for its population.